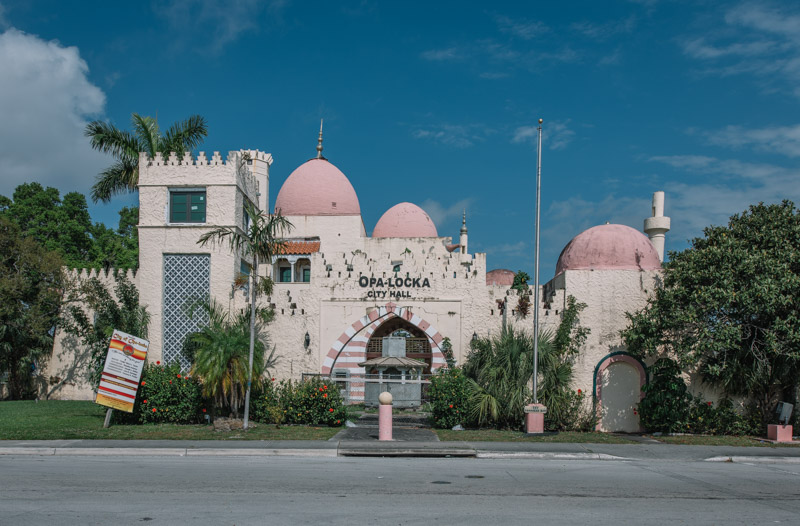 The city of Opa-locka in Miami-Dade County is the brainchild of Glenn Curtiss, known by many as the “Father of Naval Aviation”. Glenn Hammond Curtiss was born on May 21, 1878, in Hammondsport, New York. Although his formal education only extended only to eighth grade, his early interest in mechanics and inventions was evident at his first job at the Eastman Dry Plate and Film Company (later Eastman Kodak Company). While working there, he invented a stencil machine adopted at the plant and later built a rudimentary camera to study photography.

Curtiss began his career as a Western Union bicycle messenger, a bicycle racer, and a bicycle-shop owner. His interests shifted towards motorcycles as internal-combustion engines became more available. He began manufacturing motorcycles in 1902 with his own single-cylinder engines. His first motorcycle’s carburetor was built out of a tomato soup can and a gauze screen to pull the gasoline up by capillary action.

In 1903, he set a motorcycle land speed record at 64 miles per hour for one mile. On January 24, 1907, Curtiss set an unofficial world record of 136.36 miles per hour, on a 40 horsepower V-8-powered motorcycle of his own design and construction in Ormond Beach, Florida. His motorcycle record was not broken until 1930.

In 1904, Curtiss became a supplier of engines for the California “aeronaut” Tom Baldwin. In that same year, Baldwin’s California Arrow, powered by a Curtiss 9 HP V-twin motorcycle engine, became the first successful dirigible in America.

Alexander Graham Bell, the inventor of the telephone and co-founder of AT&T, regarded Curtiss as “the greatest motor expert in the country” and invited him to join his Aerial Experiment Association (AEA) to develop a suitable engine for heavier-than-air flight experimentation. Of the four aircraft produced by the AEA, Curtiss primarily designed their third aircraft, Aerodrome #3, also known as the June Bug. On July 4, 1908, Curtiss flew 5,080 feet during a public event, making it the first officially witnessed flight in North America. Once the AEA disbanded in 1909, he formed his own company, the Herring-Curtiss Company, in association with Augustus Herring.

Curtiss took part in the Grande Semaine d’Aviation aviation meeting at Reims, France in August 1909. Flying his Reims Racer, essentially a modified June Bug design, he won the overall speed event, the Gordon Bennett Cup, completing the 12.5-mile course in just under 16 minutes at a speed of 46.5 mph. On May 29, 1910, Curtiss flew from Albany to New York City to make the first long-distance flight between two major cities in the U.S

In June 1910, Curtiss provided a simulated bombing demonstration to naval officers at Hammondsport. Two months later, Curtiss served as a pilot during a demonstration on the feasibility of shooting at targets on the ground from an aircraft. In September, he trained Blanche Stuart Scott, who was possibly the first American woman pilot.

At the end of 1910, Curtiss established a winter encampment in San Diego to teach flying to Army and Naval personnel. Here, he trained Lt. Theodore Ellyson, who became U.S. Naval Aviator #1, and three other Army officers in the first military aviation school. The original site of this winter encampment is now part of Naval Air Station North Island and is referred to by the Navy as “The Birthplace of Naval Aviation”.

During that winter, Curtiss developed a pontoon design that enabled him to take off and land on water. On January 26, 1911, he flew the first seaplane from the water in the United States. In July 1911, Curtiss sold the U.S. Navy their first aircraft, the A-1 Triad. The A-1, which was primarily a seaplane, was equipped with retractable wheels, also making it the first amphibious aircraft. Because Curtiss trained the Navy’s first pilots and built their first aircraft, he is considered in the USA to be “The Father of Naval Aviation”.

During World War I, the United States anticipated they would be drawn into the conflict. The Army’s Aviation Section, U.S. Signal Corps ordered the development of a simple, easy-to-fly-and-maintain, two-seat trainer. Curtiss created the JN-4 “Jenny” for the Army, and the N-9 seaplane version for the Navy, and were some of the most famous products of the Curtiss company. Civilian and military aircraft demand boomed, and the company grew to employ 18,000 workers in Buffalo and 3,000 workers in Hammondsport.

In 1917, the U.S. Navy commissioned Curtiss to design an aircraft capable of long ocean flights, both for anti-submarine warfare patrol and if possible with the capability to fly across the Atlantic Ocean under its own power to avoid having to be shipped through ocean waters. Curtiss designed one of the largest biplanes designs yet, the Curtiss NC. The most famous of these flying boats were the NC-4, the first airplane to make a transatlantic flight and is currently preserved in the National Museum of Naval Aviation, at NAS Pensacola, Florida.

Peace brought an end to wartime contracts and in September 1920, the Curtiss Aeroplane and Motor Company underwent a financial reorganization. Glenn Curtiss cashed out his stock in the company for $32 million and retired to Florida.

While in Florida, he founded 18 corporations, served on civic commissions, and donated extensive land and water rights. He co-developed the city of Hialeah with James Bright and developed the cities of Opa-locka and Miami Springs. His frequent hunting trips into the Florida Everglades also led to a final invention, the Adams Motor “Bungalo”, a forerunner of the modern-day RV.

Shortly before his death, the Wright Aeronautical Corporation, merged with the Curtiss Aeroplane and Motor Company on July 5, 1929, forming the Curtiss-Wright company. While in court to contest a lawsuit brought by his former business partner August Herring, Curtiss suffered an attack of appendicitis. He died on July 23, 1930, in Buffalo, New York, of complications from an appendectomy.

Opa-locka, the “Baghdad of Dade County”

During the Florida land boom of the 1920s, Curtiss founded the Opa-locka project on 4.2 acres in Miami-Dade County. He named the development “Opa-tisha-wocka-locka”, which meant “a big island covered with many trees and swamps,” but shortened it to Opa-locka. Architect Bernhardt Emil Muller was hired to design the town in the themes of an “Arabian Fantasy” or “Arabian Nights.”

Muller designed 86 buildings in Opa-locka in a Moorish Revival style. The buildings’ elements include onion-shaped domes, minarets, crenelated parapets, Saracenic arches, watchtowers, mosaic tile, and outdoor spiral staircases. The streets were also given Arabian-related names, such as Ali Baba Avenue, Sinbad Avenue, Sharazad Avenue, Caliph Street, and Aladdin Street. Curtiss is said to have boasted on the occasion that he was creating the “Baghdad of Dade County.”

The Administration Building was constructed as the headquarters for the Opa-locka Company, the development and sales company established by Curtiss for the project. The building was inspired by the palace of Emperor Kosroushah from the tale of “The Talking Bird” and included a courtyard inspired by the “Garden of the Princess Periezade.” It would later be used as Opa-locka’s city hall.

The 1926 Miami hurricane struck in September of that year, destroying many of the original Moorish-style buildings and putting an end to the Florida Land Boom. After Curtiss’s death, his dream of Opa-locka died with him.

World War II brought large-scale military aviation to Opa-locka. The airport Curtiss built became a Naval aviation and airship mooring base in 1930. The Navy changed the original park, golf course, archery club, and swimming pool for military usage. The influx of military personnel brought the construction of multiple apartments and other buildings not in keeping with the city’s original theme. When the airbase was decommissioned in 1963, Opa-locka’s economy became depressed.

In 1959, Bernhardt E. Muller returned to Opa-locka for the first time since the 1920s to find his and Curtiss’ city of dreams ruined. Many buildings of his design were either alters or demolished and found a collection of plain, unappealing structures, which he sought to avoid while designing the city. In an address to the city’s Chamber of Commerce, he tried convincing the officials to prevent Opa-Locka from becoming a “meaningless jumble of unrelated buildings, painted in hideous colors” and to continue with Curtiss’ dream. While his intent was to inspire them to take action, it instead offended local officials.

Heading into the 21st century, the city never improved. Opa-locka has been declared one of the most dangerous cities in the nation with some of the highest violent crime rates per capita and has been described as being “mired in crime and sinking fast.” The Opa-locka Police Department is undermanned, underpaid, driving donated police cruisers and a headquarters that leaks rainwater and grows mold.

The city government as a whole is also rife with corruption. The FBI had been investigating the corruption since 2013 and raided the city hall in 2016. They found the city had wasted millions of dollars on needless parties, fancy meals, SUV trips, and draining city coffers. By then, multiple officials had already been convicted of criminal charges, many of which who were extorting money from local business owners. One commissioner facing bribery charges, Terence Pinder, killed himself by driving his SUV into a tree. As of 2019, the city is still in a state of financial emergency.