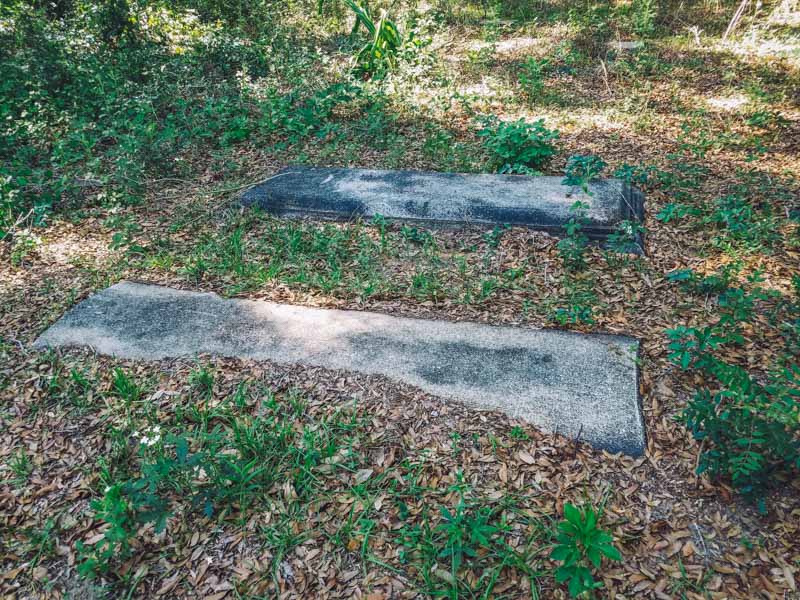 Located in the small town of Trilby, down a dirt road and set back in the woods of a residential neighborhood is a small cemetery mostly known only to locals.

Scott Black, a Dade City commissioner and businessman, has researched and documented much of the history of the cemetery and those buried there. According to him, it isn’t known if this cemetery ever had an official name, but historically it has been referred to as the ‘Trilby Colored Cemetery’. The name has been documented in the records of Coleman & Ferguson Funeral Home, which handled some of the burials in this cemetery in the 1920s, all of which are now unmarked graves.

There are quite of number of sunken areas throughout the property indicating there are many unmarked graves here. Some graves have unmarked slabs or headstones that at one point in time may have held information on who was buried there, but has since worn off due to years of neglect. There are also a large number of graves with temporary metal markers from various funeral homes such as Milton Funeral Home, Evans Funeral Home, and Harper’s Funeral Home.

The old Dade City Banner newspaper rarely reported on deaths in the black community, but they did write about Edgar Donaldson, an employee of the railroad, who drowned in the Withlacoochee River in March 1923. Lyman Smith is also said to be buried there, killed in April 1935 by a train near a railroad crossing. Another article reported the lynching of Will Leak on August 6, 1915, after being accused of attempted rape. According to another article, Howard Will is buried there, who was shot and killed by his wife on May 27, 1935. George Lark is also buried there, shot by a Pasco County Sheriff’s deputy in December 1925.

Even though the latest burial there looks to have been in 2010, the cemetery has a excessive amount of undergrowth and overgrowth. While walking through the high grass and kudzu, there were a couples times where I stumbled over a rock, only to find the rock was an unmarked slab covered in dirt. There have been efforts in the past to spruce up the property, but it looks like no one has cleaned up there in a while.