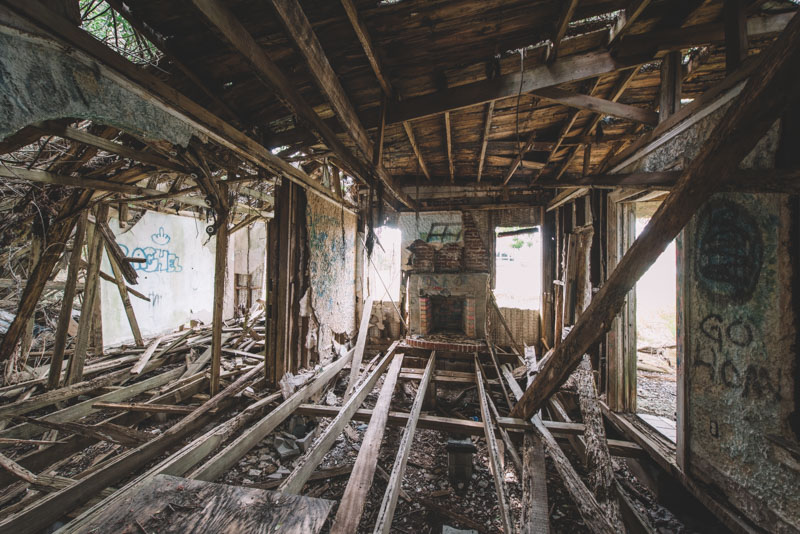 Off of US Hwy 1 in Sebastian, overgrown and invested with bees, are the remains of a Spanish-style building known as the Okie Bland House. From my searches, there isn’t much information about this particular house. According to Mike Woodfin:

“These houses were called “Okie Bland” houses, which seems to indicate that Bland might have been the builder, as well as the developer of Ocean Breeze Heights Subdivision in Sebastian, Florida. The Stucco over wood, Spanish style house was small with no heat or AC. Platted in 1925 as a residential subdivision along with parks, the area now the plat has US Hwy 1 running through the center.

Frank Vickers bought this property from Okie Bland however they paid no taxes until 1939. Totally termite eaten and rotten the house was discovered completely covered in brush and trees. One tree is growing through the middle of the structure. Destined for demolition, the house has had a succession of renters throughout the years ending sometime in the 1960’s. There was a garage that was demolished and a goldfish pond that was filled in years ago.”

Just down the street, located at 710 Jackson St, you can see another Okie Bland house which is a great example of what the house would’ve looked like if it wasn’t in ruins. This house will probably be torn down as the property is worth more without the dilapidated, overgrown, and bee infested house on it. That is an unfortunate reality for many abandoned places.