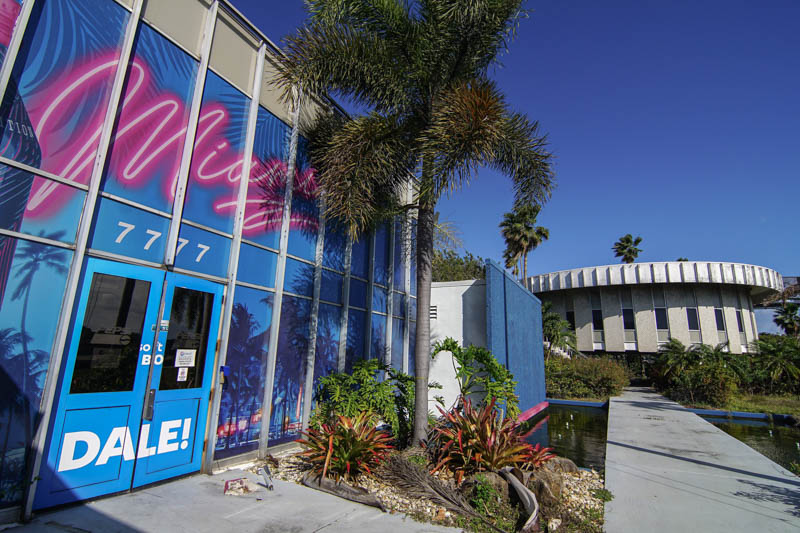 Located in Doral, the Pepsi Company plant was initially constructed in 1964 which included a 145,000-square-foot bottling plant, offices, and a unique Brutalist-style theater reminiscent of a soda bottle cap. After multiple expansions in the following years, the plant would eventually encompass 232,919-square-feet. The plant was designed by architectural firm Daverman Associates located in Grand Rapids, Michigan, under the supervision of Robert J. Boerema, a Miami architect. Boerema served as chairman of the National American Institute of Architects (AIA) Committee on Public Architecture, and President of the Florida Association of AIA, and a Fellow of the AIA. Daverman Associates architecture firm who designed the theater was one of Michigan’s leading midcentury architectural firms and many of their works remain to be cataloged, though Michigan Modern has made a good start.

In late-2017, the property was purchased by local real-estate-development firm Terra and commercial real estate property manager Terranova Corp. for just over $40 million. The partnership announced plans to create a retail-and-warehouse complex called District 79, a mixed-use development consisting of 500,000 square feet of retail/commercial space and 60,000 square feet of warehouses. District 79 would have included green features such as native landscaping, emergency efficient air conditioning, electric vehicle charging stations, and recycling bins. The plan called for the demolition of the entire plant with preservation groups such as the Historic Preservation Association of Coral Gables hoping to convince the developers to preserve and incorporate at least some of the buildings, especially the theater, into any new construction. The plant continued to be leased to the Pepsi Company until July 2020 when the company discontinued operations.

The plans for District 79 were scrapped and the former Pepsi plant was sold in February 2021 to GLP Capital Partners, a Santa Monica-based logistics-investment firm, for $55 million. GLP plans to turn the 1960s Brutalist style theater and plant into warehouse space. GLP has been investing in Miami since 2019 with the Pepsi plant being the firm’s third Miami warehouse. The following photos are courtesy of Larry Shane whose photography you can find at Larry Shane Photography.