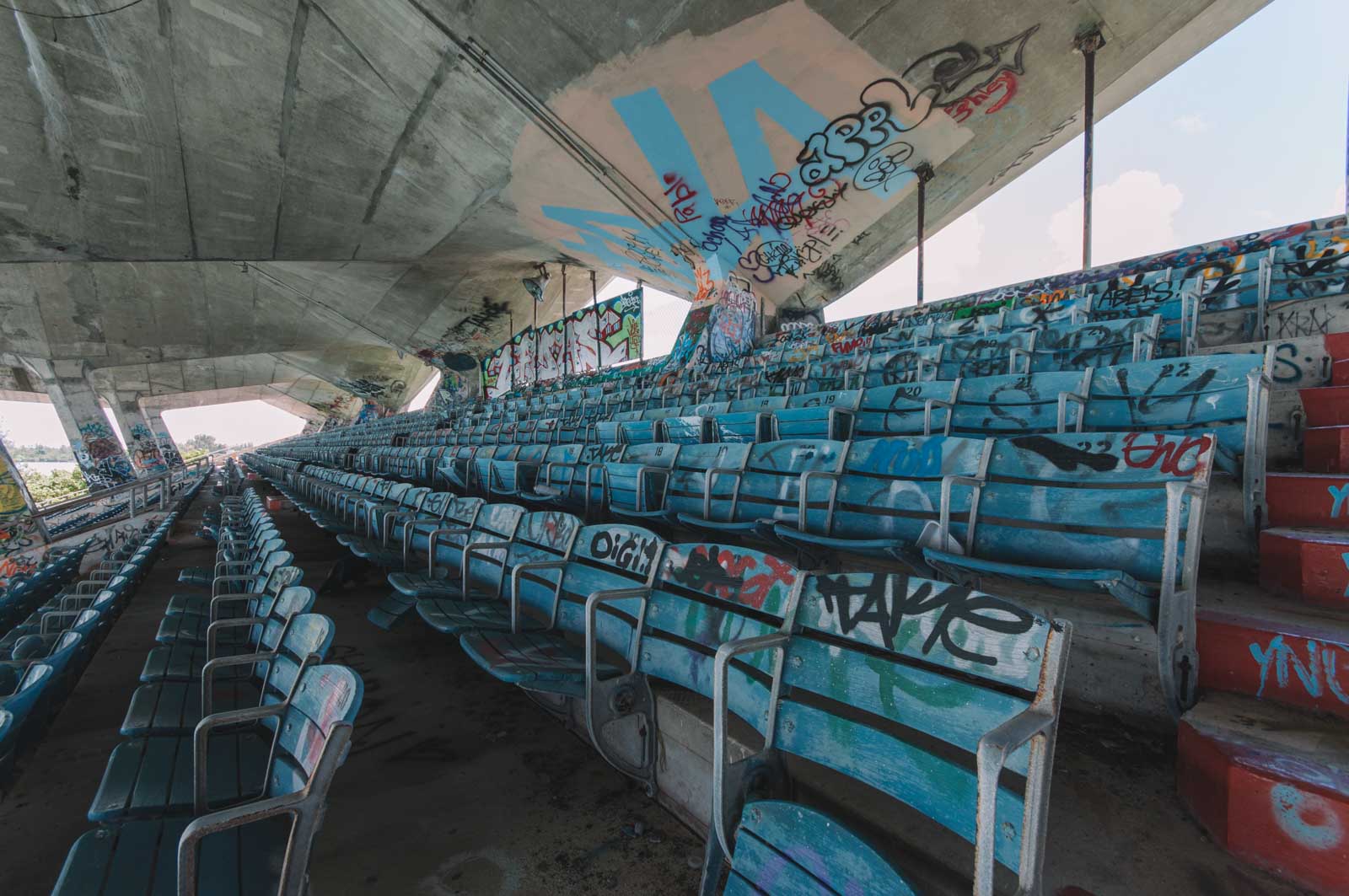 Designed by architect Hilario Candela, a 28-year-old recent immigrant from Cuba, the Miami Marine Stadium was built on Virginia Key as the United States’ first stadium purposely built for powerboat racing on land donated to the City of Miami by the Matheson Family. The stadium was dedicated as the Ralph Munroe Marine Stadium and was completed at a cost of around $2 million. It opened in 1963.

Utilizing a floating stage in front of the grandstand, the stadium hosted many world-class powerboat events including Unlimited Hydroplane, Inboard, Outboard, Performance Craft, Stock, Modified, and Grand National divisions as well as other special event races. The stadium would become the site of a number of nationally televised events including the Bill Muncey Invitational and the ESPN All American Challenge Series and in later years, would become host to different events ranging from boxing matches to classical concerts to Sunday services. The stadium was also the site of the famous hug given to President Richard Nixon by Sammy Davis Jr. during a rally for his Presidential re-election.

Going into the 1980s, the stadium saw a decline in events due to a number of issues including new restrictions, political pressure from the City of Miami, and a lack of promoting such events. Along with the issues mentioned, the stadium was also facing growing competition from newer venues such as the James L. Knight Center and the Miami Arena. The last major race at the stadium was the 1987 Inboard Hydroplane National Championship and by the 1990s, powerboat racing at the stadium was nothing but a memory. In 1992, Hurricane Andrew struck South Florida, causing billions of dollars worth in damages. After the storm, engineers for the city condemned the stadium due to cracks found in the foundation. In later years, independent engineers would declare the structure sound although needing refurbishing with estimated repairs to exceed $2 million.

On February 20, 2008, Friends of Miami Marine Stadium was founded whose “purpose is the restoration and return to operation of Miami Marine Stadium. It is the goal of Friends of Miami Marine Stadium to work with the City and community at large to accomplish this purpose and have it operated in the public interest.” Much progress has been made towards their goal since their formation including the designation of the stadium and basin as a historic place by Miami’s Historic Preservation and Environmental Board in 2008. It has also been recognized as an architectural masterpiece by the National Trust for Historic Preservation and World Monuments Fund.

On April 6, 2010, Miami-Dade County Commissioners passed a resolution to allocate $3 million to the stadium to start its historical preservation and return it as a venue for water sports and major concerts. It was only in March when an engineering study by the firm of Simpson Gumpertz found that renovating the stadium would cost between $5.5 and $8.5 million, which is substantially less than the $15 million the city of Miami initially said it would take to renovate the facility.

The City of Miami granted control of the stadium property to the group in 2013, and the group returned in late 2014 with a revitalization proposal and supposed funds. The proposal would have cost about $121 million and would have brought the Miami Boat Show to the stadium, but the proposal was shot down by the City Commission after learning that the proposal also involved extensively developing the site to add an exposition center, dry dock storage, retail, and restaurants. The proposal also included the inclusion of Hilario Candela and Jorge Hernandez as architects, which would allow them to receive payment for the restoration project.

The City resumed control of the stadium and has stated the restoration has been put on hold but will continue to work with the Miami International Boat Show. On occasion, the city allows special events to be held there such as a fashion show held by Louis Vuitton in December 2021 coinciding with the opening of their first standalone men’s store in the U.S. A tribute was held for Virgil Abloh, the artistic director of Louis Vuitton’s menswear collection who passed away just a few days prior. Its continued use gives hope for its preservation and reuse. You can read about the Miami Marine Stadium and many other abandoned places in my book, Lost Miami: Stories and Secrets Behind Magic City Ruins.