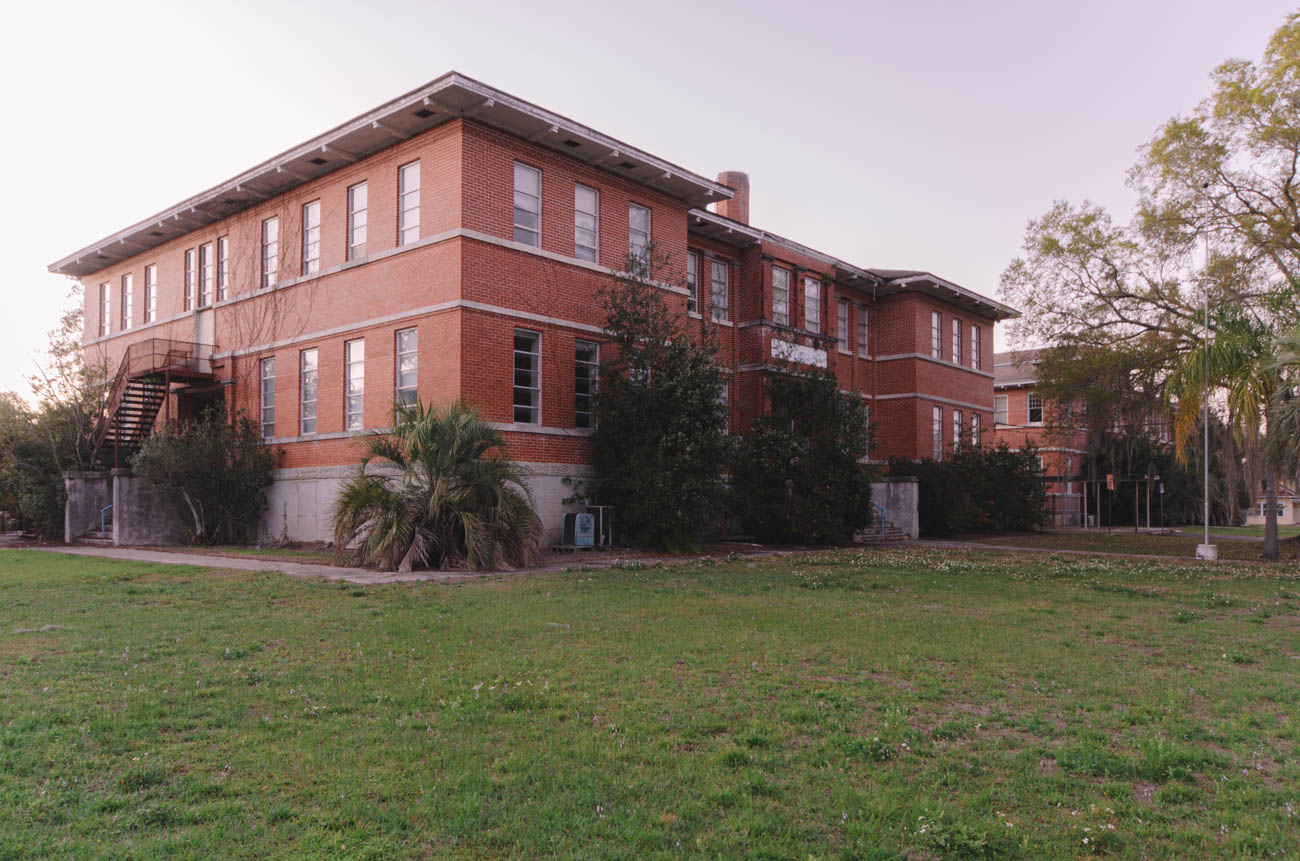 Lee School, also known as Leesburg High School and later known as the Lee Adult Education Center, is a historic school in Leesburg. The first schools in Leesburg were private institutions with the first being a small log cabin located at the site of Lone Oak Cemetery. There was a later building located at the site of the present city hall where the first floor was used as a school and for church services, and the second floor served as a Masonic Lodge meeting hall.

The first public school was established in 1889. Since there were no county or state funds for building schools at the time, the citizens of Leesburg purchased a brick building located on 13th Street, where the Melon Patch Theatre is located today, from the Florida Methodist Conference.

Renewed prosperity in Lake County prompted the County Board of Public Instruction to construct a series of modern schools. Between 1914 and 1916, schools were constructed in Clermont, Umatilla, Tavares, and Leesburg. Students in rural districts were transported to larger schools where they could benefit from better facilities. The consolidation of schools also meant that more money could be spent on fewer but more efficient facilities. In 1914, the old school on 13th Street was condemned, and construction began on a new school building and auditorium which came to be known as the Lee School. Designed to hold grades 1 through 12, the new buildings were completed in the spring of 1915 at the cost of $40,000.

According to the National Register of Historic Places in 1995, the Lee School’s main building is described as such: “The main (east) facade of the south building is divided into three major bays, with a central recessed block flanked by two wings. The central section of the facade consists of eight bays, two of which are occupied by a two-story entrance pavilion. The main entrance stands at the head of a flight of concrete steps, flanked by solid concrete balustrades. The doorway is recessed into the entrance pavilion and consists of a single-leaf glass and aluminum door framed by plate glass sidelights and transom lights. The door and window bays in the central block of the main facade are separated by brick pilasters with cast concrete capitals and bases (Photo 2). Pilasters on the entrance pavilion are found on both stories, being separated by a frieze with a rectangular recessed panel in its center. The other pilasters on the facade are two stories high and rise from the level of the window sills of the first story to the cornice level of the windows of the second. The major original fenestration in the building consists of wood frame pivot windows with 1/2/1 lights.

The wings each have three-bay facades. The first and second stories are separated by a frieze band bordered by concrete string courses. There is a granite string course that marks the juncture of the basement with the brick structure above. The sills of the windows on the first story rest upon a continuous string course, and all three string courses continue to the other elevations of the building. The south elevation of the building has a secondary entrance near its center that lies at the head of concrete steps similar to those found on the main facade. Above the entranceway on the second story is a metal emergency stairway. There is also an entranceway to the basement of the building located near the southwest corner of the elevation. The rear (west) elevation has an entrance that is sheltered by a flat-roofed porch and reached by transverse steps leading to a high stoop. An elevator tower (Photo 8) that provides access to both floors of the building is attached to the north elevation of the building. This elevation also features metal fire escape stairs, and there is a covered entranceway to the school basement similar to the one found on the south elevation.

The interior of the south building contains most of its original hardware and finishes. However, a dropped ceiling has been added to allow the installation of air conditioning, and the original light fixtures have been replaced by fluorescent lighting units. The main entrance opens onto a short hall flanked by restrooms and storage areas. This hall terminates at a transverse hallway near the school offices. The first floor contains four classrooms. These are found at the four corners of the building at the ends of the transverse hallway. Small foyers at both ends of the hallway contain secondary entrances and stairways to the second floor. These foyers are separated from the hall by glass brick walls. The second floor contains five classrooms, a library, a teachers’ lounge, and restrooms.

Lee School housed all grades until 1918 when further consolidation by the Board of Public Instruction prompted the construction of the north building. The structure was completed in 1923 and became the high school. Due to schools closing in outlying areas such as Whitney, Lisbon, and Yalaha, more rooms were needed and twelve classrooms were added in 1926. Enrollment at Lee School continued growing rapidly and it became necessary to hold classes in nearby churches. Leesburg High School located on 14th Street was constructed in 1927 to house junior and senior high school students.

Between 1928 and 1974, Lee School served as a grammar school and it was during that time that the auditorium was razed, as well as the twelve classrooms which were added on in 1926 as they were deemed structurally unsound. Lee School also served as a community center and a hurricane shelter. During World War II ration books were issued at the school, and the facility served as a daycare center for children of mothers working in the war effort.

In 1974, a cafetorium was constructed and Lee School was renamed Lee Adult Education Center, providing citizens of Lake County who have not finished high school with the opportunity to obtain a diploma. On February 17, 1995, it was added to the National Register of Historic Places, joining the Mote-Morris House as the only other Leesburg site on the list.

By 2008, the Lee School was closed and the property was put up for sale by the Lake County School District. The property was purchased in 2014 by Tony Benge, a developer based out of Orlando, for $200,000. There were plans calling for the restoration of the buildings and turning the property into a 152-unit assisted living facility, but those never got past the planning phase.

Ocala-based Prospera Senior Living bought the property in November 2018 for $1.25 million, also with plans to turn it into an assisted living and memory care community. However, when crews started working on the buildings in 2019, they discovered it was in worse shape than they thought. Crews stripped the ceilings and found issues with the electric wiring, plumbing, and HVAC. The sprinkler system was also not up to code. Original cast iron pipes were also removed from the buildings. This is when the plan changed to outright demolishing the structures.

Since the property is on the National Register of Historic Places, any plans for calling for its demolition would have to be signed off by the local historic preservation board. It was during the COVID-19 pandemic that any and all plans were halted, and it was also around this time that the site was listed on the Florida Trust’s 2020 “11 to Save” due to it being at risk of total demolition. After some back and forth, it was agreed that the smaller of the two buildings, the north building, would be demolished. The original building built in 1915 will be saved and turned into 14 apartments as part of a larger complex with a total of 49 apartments.

Author’s Note: In 2019, the movie The Mad Hatter (2021), starring horror movie icon Michael Berryman, was filmed at the Lee School along with the Howey Mansion which was the subject of the film. Since its release, it has garnered unfavorable reviews and sits at a 2.8/10 on IMDB.