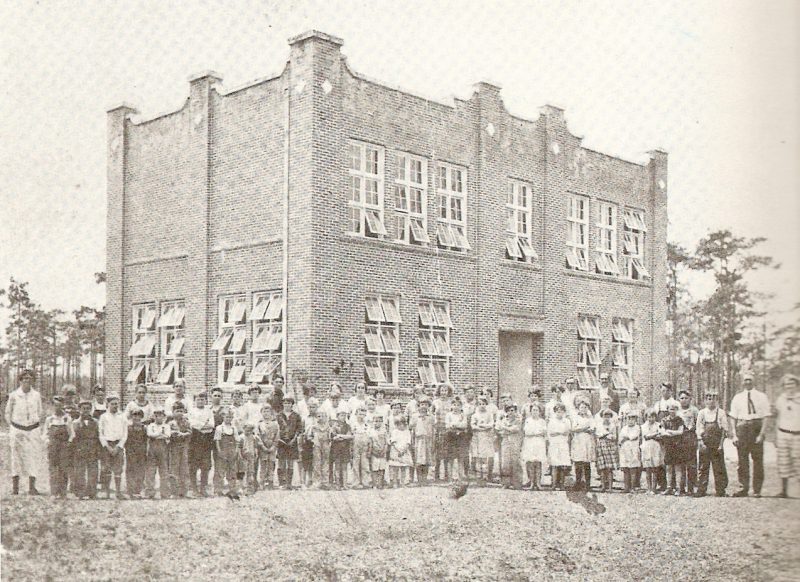 Kenansville is a small community located just 12 miles north of Yeehaw Junction and 27 miles south of St. Cloud. It was given the name Kenansville after Mary Lily Kenan Flagler, the wife of Henry Morrison Flagler. In 1910, Henry Flagler made a deal with the town of “Whittier” that he would bring his railroad, the Florida East Coast Railroad, through the area to assist in their turpentine operations if they were to move to a new location and rename the town to “Kenansville”. He also made a promise that if the town’s name was changed, he would make a $10,000 contribution to build a new school.

In 1913, Henry Flagler fell down a flight of marble stairs at Whitehall, his winter residence located in Palm Beach, Florida. Never recovering from his injuries, he died two days later.

In 1914, Mary Lily Kenan kept the promise her late husband had made and donated five-acres of land and $6000 to the community to build a new brick schoolhouse to replace a smaller wooden school. The two-story masonry vernacular brick building was erected in 1916 by architect, A.J. MacDonough.

Classes began in 1917. At one time, the school had five teachers and went all the way through high school. Three grades were taught in each of the four rooms. For decades, the school was considered one of the state’s most outstanding rural schools. In the 1950s, one county school official stated that Kenansville pupils were “better grounded in the fundamentals of learning than most any other in the county”.

The school board voted to close the school in 1961 and it remained closed for 30 years. In 1992, the school reopened as a response to a petition signed by 140 residents. During it’s reopening, the school served students from pre-K to third grade, while older students were bused to Ross E. Jeffries Elementary and other schools in St. Cloud.

It was permanently closed down in 2003.

In 2005, the school was deeded to the Kenansville Community Association. The associated applied for the National Register of Historic Places in 2008, but were rejected due to the lack of “historic physical integrity”. It was at this time that it was decided to restore the school to it’s original historical condition.

Though a lot of progress has been done, work continues on restoring it to this day.