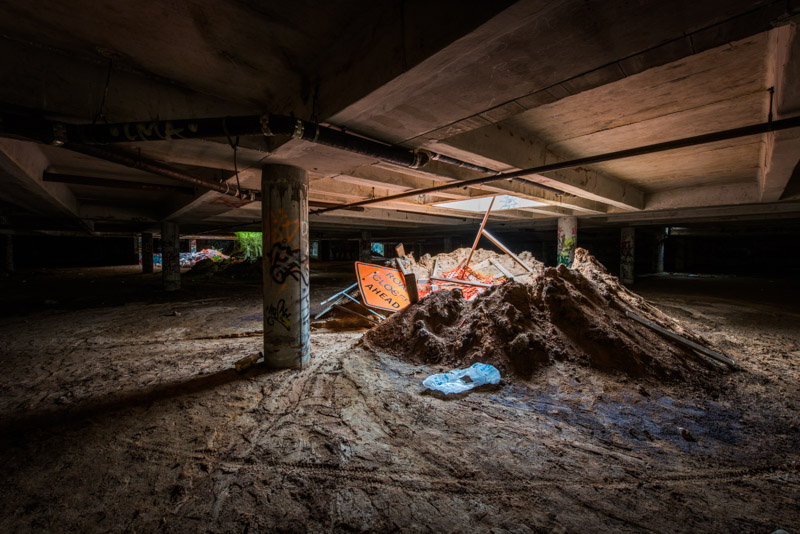 Located on Jupiter Island Park is an underground parking garage which is known to many locals as the “Jupiter Dungeon”.

The parking garage was part of a hotel and retail project which started in the early 1980s originally to be called Calle Viejo, Spanish for “old street”. The hotel plaza was to open in 1985 and was planned to include a 154-seat restaurant, 86-seat bar, and 23,000 square feet of boutiques, cafes and specialty shops.

Work on the project came to a halt in 1986 when the lender Sunrise Savings & Loan Association stopped paying for construction. When Sunrise stopped paying, the construction company filed a lien against the developer for $621,000. The property was sold at auction to satisfy the debt.

The property was bought by Jack Piatt, a Pennsylvania developer who was a winter resident of Palm Beach Gardens, and announced plans to resurrect the project in 1988. No work had been done on the project and officials demanded updates, citing weeds sprouting, broken glass and deterioration of the existing beams due to the salt air.

In 1999, the Town of Jupiter took ownership of the property to this day, nothing has been done with the land. There have been suggestions such as building a 600-car garage in its place but the only happenings there has been the addition of a new chain-link fence and “No Trespassing” signs which surround the property. Despite that, it’s still frequented by vandals and homeless people. If caught, the Jupiter police do not hesitate to arrest those trespassing on the property.