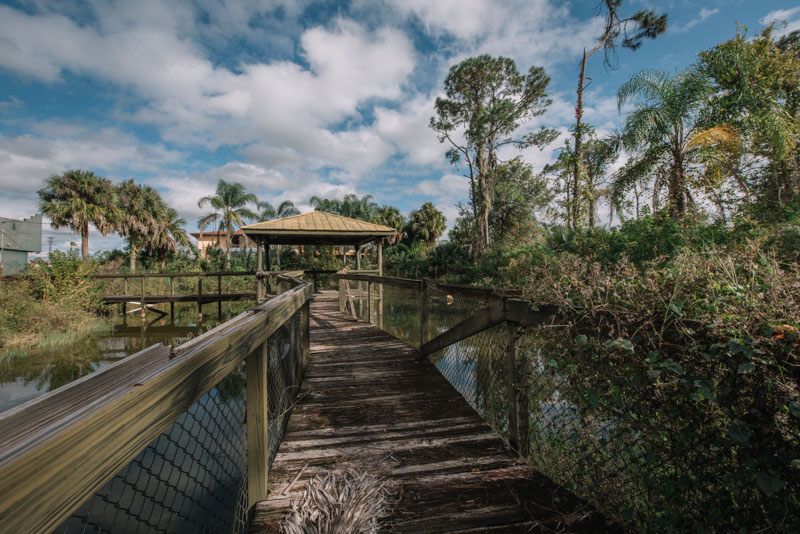 Irlo Bronson Memorial Highway in Kissimmee, Florida is sometimes known as it’s “tourism corridor”, which features many tourist attractions and businesses. Competition is tough along the stretch, and as competing with nearby Walt Disney World makes it even more difficult, it wouldn’t be too hard to wonder how many attractions have been lost over the years. So far, we have covered a futuristic home, a Communist-run amusement park, and now the home of the world’s second-largest alligator.

One of the more distinct attractions in the area, Jungleland Zoo could be spotted by the 126-foot long alligator which sat prominently in front of the Gator Motel. For years, the Jungleland gator was the largest gator in the world until Swampy was built at an amazing 200-feet long, at Jungle Adventures in Christmas, Florida.

But as cool as that gator was, this article isn’t about it, but about the zoo just beyond it. Back in the 1970s, Alligatorland Safari Zoo opened at the site where Jungleland Zoo now sits, and featured over 1600 exotic animals and birds. Proving that competition was tough, in 1982, Gatorland Zoo filed suit against Alligatorland for attempting to build a strikingly similar entryway to theirs that resembled a gator’s open jaws, which Gatorland had since the 1960s.

Around 1985, the state of Florida came under fire over the mistreatment of animals in private attractions, labeling zoos such as the Brevard Zoological Park and Everglades Wonder Gardens as the worst zoos in the country. Inspections were made between March and October at the Brevard Zoo by the National Wildlife Humane Society and found that a lot of the animals were suffering “psychologically, if not physically.”

In 1990, Alligatorland Safari Zoo came under attack after they received a surprise inspection from the USDA and were charged with keeping inaccurate records, having poor sanitation and structural conditions in some of the cages, and having poor veterinary care for it’s animals. Gerald Dienhart, a veterinarian who was part of the surprise inspection, cited them after finding unsanitary amounts of aging dung in a rhesus monkey cage and balding pop-bellied pigs.

Darren Browning, the owner of Alligatorland, refused to acknowledge the USDA’s right to regulate his business, claiming the violations never existed or were quickly corrected and refused to pay a $1,500 fine. He characterized the fine as nothing more than a ploy by the USDA to punish them for refusing to erect a $20,000, 8-foot tall security fence to keep the wild animals from escaping.

USDA inspector Richard Overton, who supervised the inspections, said the security was unrelated to the fine but an important issue. “In the middle of the Okefenokee Swamp, if they didn’t have any dangerous animals or a lot of people around, then they wouldn’t need an 8-foot fence”, said Overton in an interview with the Orlando Sentinal, noting that dangerous animals, such as spotted hyenas, are kept there. “If one of those got loose you wouldn’t want to have any children close by.” It would be proven in later years, that someone doesn’t believe in the term, “Learn from history, or suffer the consequences.”

Browning chose to fight the fine at a two-day USDA hearing in November 1992, representing himself because he said he knows as much about exotic animal care as USDA inspectors, and it would have cost too much to hire an attorney. He attacked the competence of the USDA inspectors, asking if they knew the difference between old monkey dung and dung from a constipated monkey. After losing consequent battles in court against the USDA, the Brownings sold the property in 1995.

Jungleland Zoo opened in 1995 and housed over 300 exotic animals, a large drop from Alligatorland which featured 1600 animals. The zoo was best known for its big cat shows which showcased different species of cats, from bobcats and lynxes to Bengal and Siberian tigers.

During the winter of 1997, days of rainfall flooded the swamp, making it a dangerous situation for the caged animals. On December 15, while handlers tried to raise the cage of their 450-pound lioness above flooded ground, it escaped into the marsh. A search for Nala, named after a character from “The Lion King” was quickly initiated, ranging over the swamp along Hwy 192. Though wildlife agents were equipped with an infrared sensor attached to a helicopter and over 20 agents on the ground with tranquilizer guns and rifles, a canopy of lush vegetation and 4-foot-deep water, made it difficult to track her. Residents and tourists were put on alert, but Jungleland officials claimed that lioness was “hand-raised, declawed and very sociable”, basically saying she wouldn’t hurt a fly unless told to do so.

Finally, after two days, she was spotted just a few hundred yards from her cage at the zoo. Dr. James Barnett, a veterinarian, moved in but upon being spotted, Nala hissed and made an attempt to hide under some bushes. Dr. Barnett fired two shots, missing with the first shot but finding its mark on the second. It took five minutes for Nala to become sedated, where Dr. Barnett injected her with more tranquilizer.

In late-2002, the zoo removed it’s animals from public view and had set all of their gift shop stock at 50% off. The owners claimed they were another victim to the post-9/11 economy, but the local Channel 6 News reported the zoo was being investigated by the Florida Fish and Wildlife Conservation Commission and the U.S. Department of Agriculture for possible violations of the Animal Welfare Act. A surprise inspection in June by state inspectors said the “facility is suffering from a severe drainage issue,” noting rotted cages and inadequate fence heights. The inspectors also reported that “the animals looked healthy.”

A letter was taped to the window of the gift shop by the owners, while also claiming they had sent a copy of the letter to President Bush. The letter read in part, “This treatment by Channel 6 smacks of an old-time lynching,” and “Animals do not breed in places they are not comfortable in and all our breeding pairs produce here at Jungleland.”

In October 2014, it was found that the alligator statue stood outside Jungleland Zoo since it opened was demolished. The statue was the world’s second-largest alligator, beaten only by Jungle Adventures’ “Swampy” in Christmas, Florida.

The property was purchased by Patrick Clancy, founder, and owner of Jungle Habitat Preserve, an exotic animal sanctuary that cares for unwanted animals due to lack of funds or other reasons. Unfortunately, further money was needed to repair and modernize the property. The property was foreclosed on in 2017 and later sold again at the end of 2018 to Jungleland Zoo Partners, LLC. In September 2020, the property was purchased once again by Krush Acquisitions and will be revitalizing the former Jungleland Zoo to be a vibrant German-inspired beer garden. It will include a brewery, eateries, live music, and attractions for families and kids alike like mini-golf, outdoor theater, playgrounds, and a train that circumferences the whole property. Krush Brau Park is planned to open in 2021.