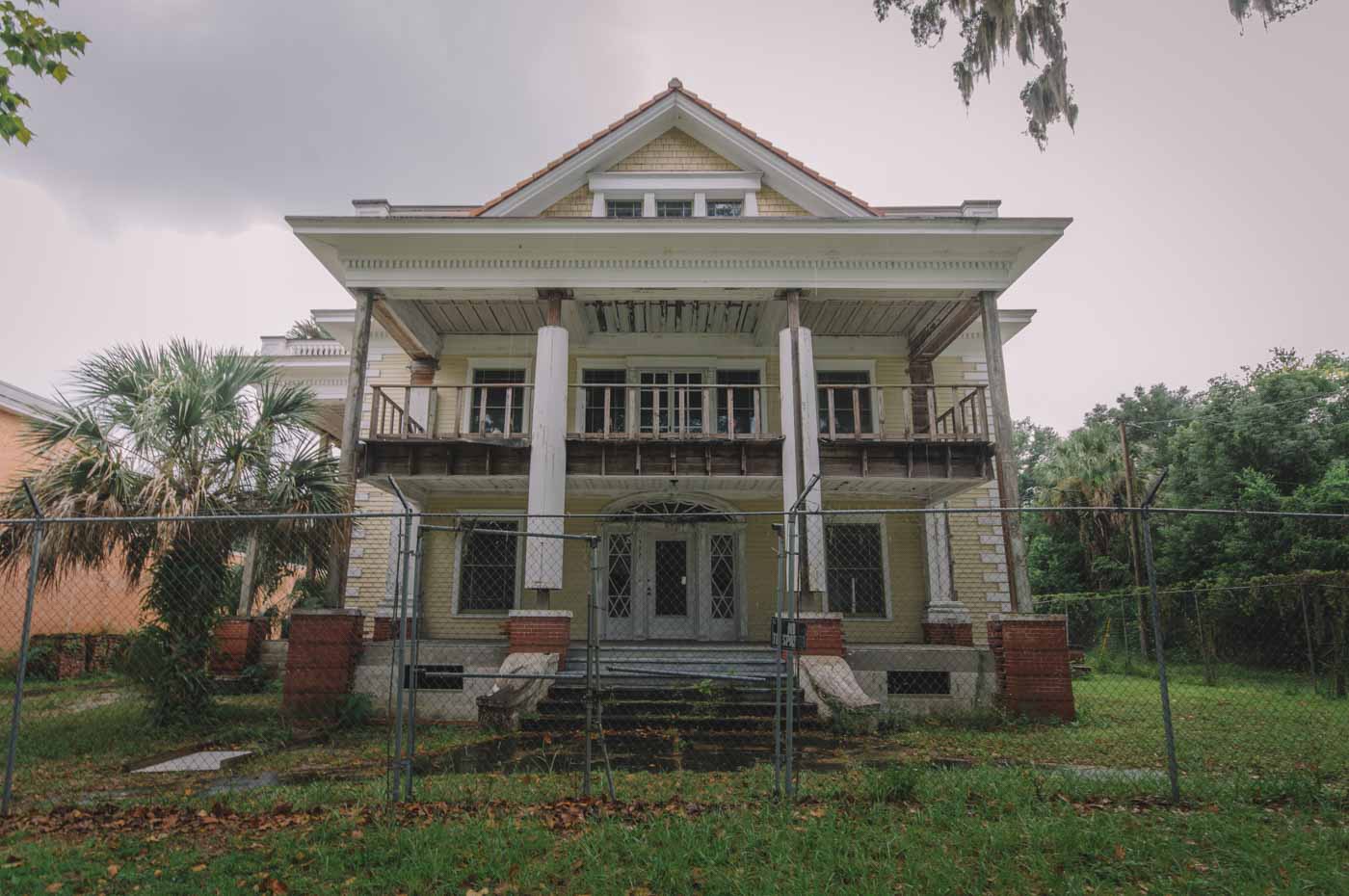 The John Dutton House is located in the West Deland Residential District, a historic district in Deland, Florida, added to the National Register of Historic Places on November 20, 1992. The district encompasses approximately 1,000 acres and contains 375 historic buildings. It is Deland’s oldest and most historic residential neighborhood with buildings dating back to 1884.

John Wesley Dutton was born on April 14, 1868, in Statesboro, Georgia. He was a prominent businessman who made his fortune in the turpentine and lumber business. Dutton also became a real estate developer later in life, starting the Westwood Subdivision in 1924 where a street, Dutton Avenue, was named after him. He began plans to build his mansion in 1908 when turpentine, lumber, and citrus were Central Florida’s main industries. The Classical-Revival style house was designed by Cairns & Fitchner, a local architectural firm, and is considered their greatest design.

Built in 1911 at the cost of $25,000, it was constructed under the supervision of local contractor Gus Lauman whose portfolio includes the 1925 Landis-Fish Building in downtown Deland. The two-story house features Corinthian Columns that supported tiered verandas, ceramic tiles on the roof and gable ends, and scroll brackets, modillions, and dentils along the frieze. The house also features a variety of exotic woods procured through Dutton’s business connections. He lived here with his wife, Lilla Hart Dutton, and their seven children until 1921. Dutton died on October 28, 1925, and is buried alongside his wife in Oakdale Cemetery.

In a letter written by Dorothy Douglass Dickey in May 1992, she explained how she and her family moved to Deland in 1918 and lived across the street from the College Arms Hotel, now the site of the College Arms Tower apartment building. In 1921, she wrote that her father traded their house for the Dutton family home. It’s not clear how long they lived in the house as she explains, “The last six years before I married my Stetson sweetheart, we lived in 7 states and 13 houses, three of which were in Deland. We left at the end of July 1924.”

After the Douglass family moved out, it became known as the Griffith-Stith Funeral Parlor sometime around the 1920s. Jesse Milton Stith was born on August 19, 1868, in Hardin County, Kentucky, and died on February 24, 1955, and is buried in Oakdale Cemetery alongside his wife, Mercedes Stith. By the time of his death, Jesse M. Stith had retired as a funeral director and owned a furniture store where he presumably sold caskets.

The rest of his family was in the funeral business as well. His brother, Jack Achilles Stith, came to Deland in 1902 after graduating from the Louisville School of Embalming and practiced funeral directing and embalming in Deland for the next six years before moving to Atlanta. He opened the Stith Funeral Home in Danville, Kentucky in 1926. Around the same time, a relative of theirs by the name of Charles Bonar Stith began selling coffins out of his general store located in Butler, Kentucky, as well as practicing embalming and funeral directing within the community. It wouldn’t be long before he owned his own funeral homes in Alexandria and Dayton, Kentucky.

In later years, the Dutton house was converted into the Colonial Guest Home which rented rooms out to visiting tourists. Last known as the Colonial Arms Apartments, the city condemned the building for numerous code violations. First Union Bank, now Wells Fargo, foreclosed on the property in 1990 and was put up for sale for $129,000. When no buyer could be found, First Union applied for a demolition permit in 1993 which was approved by the Deland City Commission. Just before its impending destruction, Peter Warrick, a publishing executive from Fort Lauderdale, purchased the home for $90,000.

With plans to restore the home, Warrick soon fell ill and asked the City of Deland to take over the restoration of the house. The City felt a non-profit organization would be a better fit for its restoration and in 1995, Historic Deland Inc. was established. The group was awarded several grants through the state which allowed restoration to resume. By 2005, the organization’s board of directors had diminished and a new board was established, in turn changing the name from Historic Deland Inc. to Dutton House Inc. After applying for more grants, restoration continued until 2008.

According to the organization’s website: “Although Dutton House Inc was approved for several State grants in 2008 because of the recession no historic restoration funding was allocated. We were allowed to reapply for 3 consecutive years all with the same results. By the time the State was once again allocating funds too much time had passed and our previous spent funds were now too old to use as matching funds for the grants. Without matching funds, we can’t apply for new grants to continue the restoration. We are actively seeking any and all possible avenues for matching funds. Unfortunately, we have not been successful to date. But we continue to try.”

The group was able to complete the first phase of stabilization and 80% of the exterior was completed before funds diminished. After 25 years since restoration first began, the future of the mansion remains uncertain.

Trespassing on the property is illegal and anyone caught could face arrest.