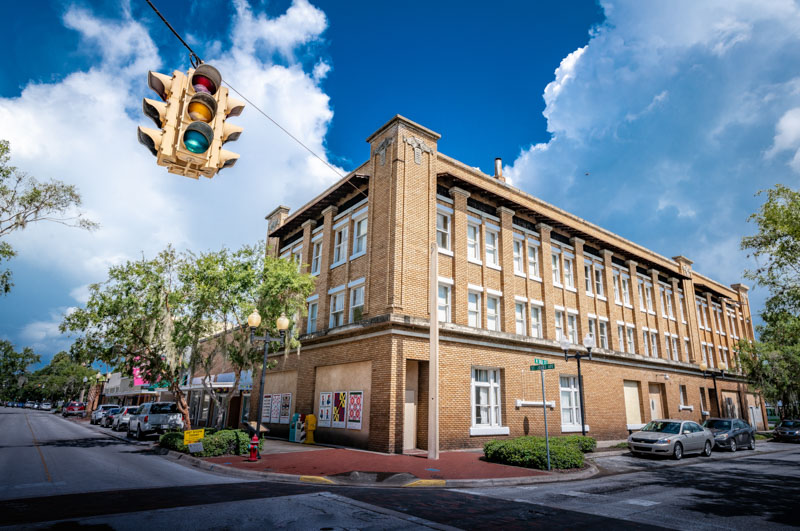 The Hotel James, alternatively the James Hotel, is a historic hotel located in the city of Palatka currently undergoing restoration work. Ground was broken on May 5, 1916, on the site of the Arlington Hotel, with construction being completed in just six months. The rapid construction was possible due to the excellent river steam service between Jacksonville and Palatka. The three-story brick building was designed by famed architect Henry John Klutho for Dr. George E. Welch, President of the Putnam National Bank.

Henry Klutho’s design bore resemblance to Frank Lloyd Wright’s design of the City National Bank/Park View Inn Hotel in Mason City, Iowa. According to the Prarie School Traveler, “Klutho grouped the second and third-story windows between brick pilasters with limestone sills and heads framing each opening, much as he had treated the south facade of the Florida Life tower in 1911. At each corner and at a secondary entrance, large brick pilasters rise above the roof parapets with fine abstract Prairie School terra cotta decoration. This decoration terminates delicate, projecting brick finials that run from the horizontal band at the second-story continuous sill. A projecting, shingled brow occurs over the third-floor windows above a perforated ventilation band serving the roof framing behind.” Klutho designed two other buildings in the city of Palatka which include the Larimer Arts Center, originally the Mellon Memorial Library, and the old City Hall which was demolished in the 1960s. The hotel featured storefronts on the ground floor and hotel rooms on the second and third floors.

The hotel remained in operation until 1984 and abandoned completely in 1992, it remained shuttered for decades. The neglect by the owner caused portions of the interior of the structure to completely collapse, although the exterior remained in great condition. In 2018, it was listed on Florida’s 11 to Save and was placed on the National Register of Historic Places in 2019. It was recently purchased and is currently undergoing extensive restoration with plans to be reopened as a boutique hotel.

Mark Krancer of Kram Kran Photo had the opportunity of photographing the building in 2018 before construction began. My thanks go out to Mark for graciously allowing the use of his photos for this post.