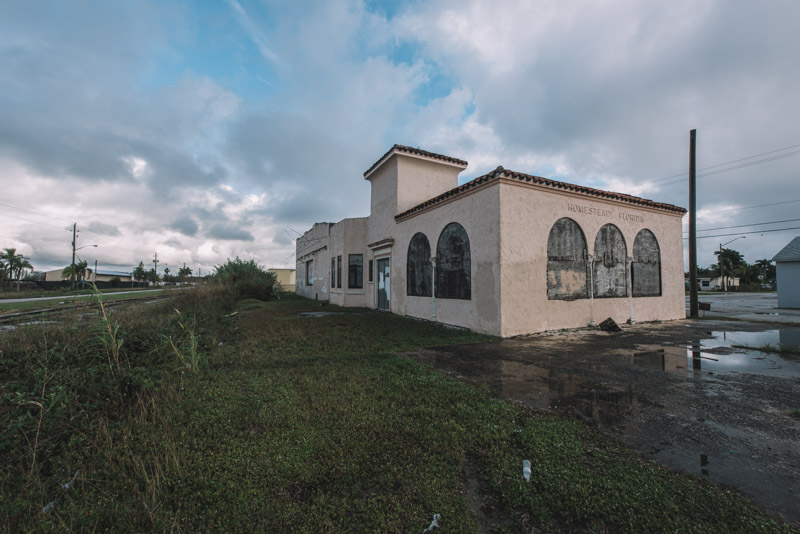 The Seaboard Air Line Railroad was established in 1900, operating nearly 4,000 miles of track running from Richmond, Virginia down through Jacksonville and ending in West Palm Beach. Solomon Davies Warfield, chairman of the Seaboard Air Line Railroad at the time, extended the railroad further into South Florida to Miami in 1925 and subsequently extending it even further to Homestead in 1927.

Constructed in 1927, the Homestead station is identical to the original construction of the Delray Beach station. Unlike the Delray Beach station though which has plain stucco arches, the Homestead station uses the same corinthian arches used in the construction of the Naples station and Hialeah station. The stations were designed by Gustav Adam Maass Jr., a notable South Florida architect of the Harvey & Clarke architectural firm. He worked primarily in the Meditteranean Revival style, designing public buildings and private homes around Palm Beach County, many of which have been designated as landmarks.

Like many of the Seaboard stations in South Florida, the building was both a passenger station and freight depot. However, this station most likely only briefly saw passenger service shortly after its construction, before the extension between Hialeah and Homestead became dedicated to freight service only.

It is uncertain when the station was closed, but it most likely occurred sometime around 1967, when the Seaboard Air Line Railroad merged with its longtime rival, the Atlantic Coast Line Railroad to form the Seaboard Coastline Railroad. The adjacent tracks are sporadically used for freight service by CSX Transportation. Of all the Seaboard stations, only two have been destroyed; the Boynton Beach station was demolished in 2006, and the Delray Beach Station was largely destroyed by arson in 2020. The Homestead Seaboard Station remains vacant to this day and while the current owner has talked about wanting to renovate the structure, there has been no work done to it.