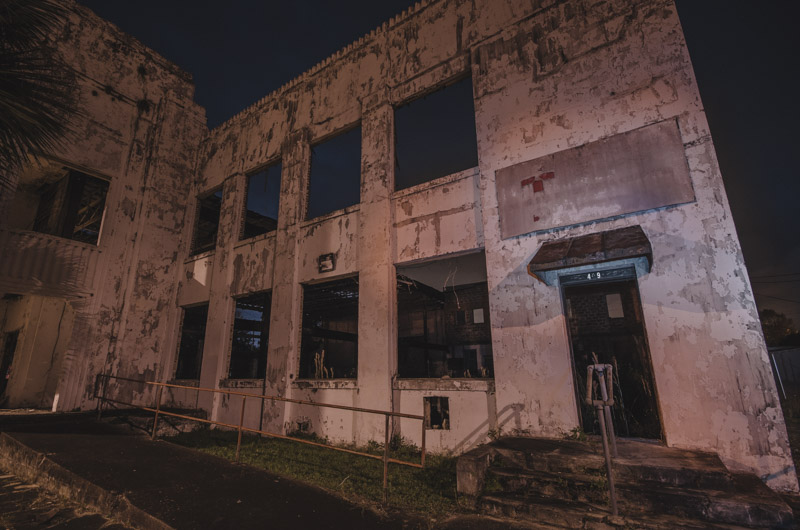 Founded in 1890 as a farming community to supply the hotels of railroad magnate Henry Flagler with fresh potatoes, cabbage, and other vegetables, the small town of Hastings proudly proclaimed itself the “Potato Capital of Florida.” With a population hovering around 600, its heyday was in the 50s and 60s. Since then, the potato fields have been supplanted by sod farms and the once-bustling downtown is nothing but empty stores and vacant lots along Main Street.

In February 1934, town officials and several residents gathered together to discuss ways to improve the town and provide a few temporary jobs through the use of federal funds. During the meeting, resident Charlie Barrett read a resolution that proposed to convert an aging schoolhouse into a community center. Funding for the project was to come from the Civil Works Administration and St. Johns County. The town acquired the Byrd Building and the Killingsworth Block located downtown through condemnation proceedings and a foreclosure tax sale, demolishing the structures, and salvaging any materials that may be useful in the construction of the community center.

The county cut funding in order to provide more funds for St. Augustine, leaving the town of Hastings with a vacant lot. The town applied for assistance from the newly formed Works Progress Administration which was approved in October 1935.

WPA construction engineer Mark Jacob Casto broke ground on the project in early November 1935 using plans drafted by St. Augustine architect Francis Allebaugh Hollingsworth. In October 1936, Casto requested forty more WPA employees to help with the completion of the Hastings Community Center, as well as another community center he was working on in the town of Bunnell. Construction was completed in March 1937. The city council instructed town clerk D. S. Hanna to write a letter of appreciation to Casto for “good work done on the Community Center Building.” Meeting rooms, kitchens, and a library were located at the north end of the building, and the town clerk and fire department maintained offices at the south end. Located in the center was a large auditorium which served as a gymnasium. The community center officially opened on May 6, 1937.

In September 1940, a leak in the roof was reported and was repaired by Richardson Roofing Company in March 1941. By June 1941, the Hastings Chapter # 48 of the Order of the Eastern Star which had leased part of the second floor reported that the roof was leaking badly. By November, water damage had caused the ceiling plaster to deteriorate and fall. In June 1942, a representative for the Eastern Star reported that due to persistent leaking, “the lodge hall in the Community Center.. .is in a dangerous and deplorable condition.” The Masonic Lodge #183 F. & A. M. of Hastings requested a ten-year lease of the second-floor lodge hall for $500 and agreed to repair the roof leaks, a request that the town gladly accepted. After making minor repairs throughout the years, the town hired a Texas company to replace the entire roof in November 1946. The leaks continued and after failing to negotiate with the roofing company, the town turned to Arnett Building & Sheet Metal Company in February 1950. Another new roof was installed and the leak issues were resolved, but by then, many of the walls and ceilings were water damaged and required repairs.

The American Red Cross has occupied the old community center since October 1942 when they began using one of the rooms to prepare bandages for the war effort. The American Red Cross remained in the building into the 1980s. By then, the roof leaks had returned and a partial roof collapse and extensive water damage forced the municipal government and other organizations occupying the building to relocate. The Hastings Town Hall and the Hastings Branch of the St. Johns County Public Library System currently occupy the former Hastings High School.

In 2005, the Town of Hastings received a matching grant of $50,000 from the Florida Department of State for the rehabilitation of the old Hastings Community Center. On February 21, 2007, it was added to the National Register of Historic Places. The coinciding documents note that the “resource is devoid of most of its windows, and is suffering from roof failure.” The documents also state that “Nevertheless, it contributes to the sense of time, place, and historical development of the Town of Hastings through its location, design, materials, workmanship, feeling, and association. It provides an important architectural, political, and social link to the heritage of Hastings. The building retains its early twentieth-century character to a sufficient degree for listing in the National Register.“

In 2018, the town of Hastings was dissolved, putting decisions about the defunct town in the hands of the St. Johns County Commission. After county engineers examined the structure, they declared it “structurally unsafe”, and the cost of salvaging it being too high. The building was demolished in early-2019.