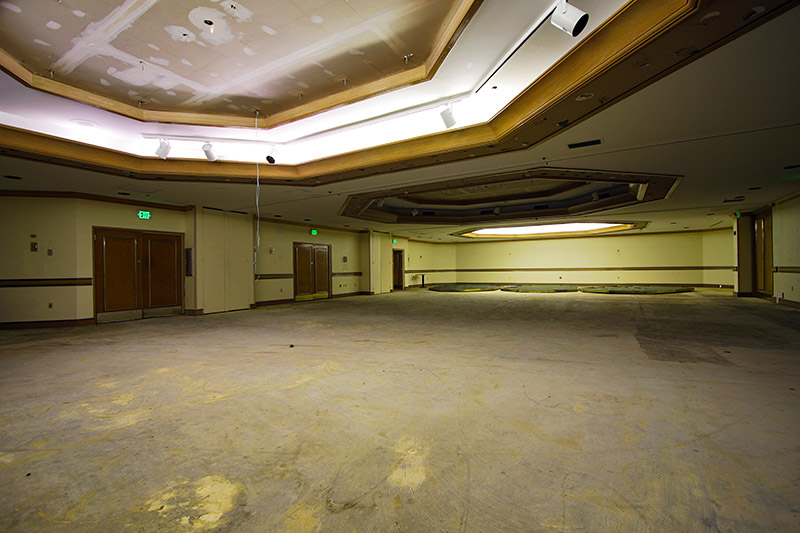 Located along Bayshore Drive in Coconut Grove, the Grand Bay Hotel resembled a Mesoamerican step-pyramid with traditional European touches and a tropical flair with bougainvillea hanging from the balconies. Outside stood a large red sculpture by prominent Ukrainian-American artist Alexander Liberman called “Windward”. Built in 1982, it was designed by architectural firm Nichols & Associates whose works include a number of office buildings and hotels such as the Hilton Miami Airport Blue Lagoon and the Doubletree Hotel in Deerfield Beach. Development of the Grand Bay Hotel was led by Sherwood “Woody” Weiser, a hotel developer and operator who became one of Miami’s leading civic and arts supporters. The Grand Bay was more akin to today’s boutique hotels with just 177 rooms, 47 of which were suites. It was the only hotel south of Palm Beach to receive a Mobil five-star rating which it received in 1987.

The hotel lobby featured crystal chandeliers, a huge tree-truck slab table, oriental rungs which covered the terra-cotta tiled floors, and tropical plants throughout. The rooms were described as having baby grand pianos, spiral stairways, canopied beds, and “bathtubs as big as volcano craters”. The Grand Cafe occupied the second floor where French chefs served Everglades frog legs with sheep’s cheese polenta and other delicacies. The top floor was occupied by the world-famous Regine’s Nightclub with sweeping views of Biscayne Bay. A private elevator, apart from the regular elevator serving the hotel, brought members to the club. The carpets were burgundy and gold, the walls were glass engraved with 1930s Art Deco design with a mirrored ceiling. Sliding glass doors separated the restaurant from the dance floor where the most exquisite French cuisine was served. Michael Jackson and his entourage occupied the top two floors during their stay in 1984 before his Orange Bowl concert. It was said one of the penthouse suites was decorated with an Egyptian flair to accommodate his needs. Other celebrities such as Prince, Elizabeth Taylor, and Sophia Loren stayed at the hotel.

In 1998, the name changed to Wyndham Grand Bay. Renovation work was done to the building which included an additional 90 rooms and suites, a new restaurant, and a 7,500 square foot ballroom. By this time though, the hotel had lost much of its luster as it dropped to a four-star rating. As more luxurious and highly rated hotels began opening along South Beach, the Grand Bay fell to a three-star rating in 2001.

Miami-based real estate developer Merco Group purchased the Grand Bay for $25 million in 2005 with plans to spend an additional $20 million in renovations to restore the status the hotel once had in the 1980s. The hotel closed in April 2008 and had completed six months of renovation work before the recession hit. The bank cut funding due to Merco Group defaulting on the loan by not making monthly payments, not paying property taxes, not maintaining insurance, and allowing the property to “go to waste”. That same year, Merco Group lost the trademark rights to the Wyndham name in a $5 million judgment from Wyndham Hotels & Resorts. The judgment called for Merco Group to change the name because it stopped paying the franchise fee in 2006.

The bank filed a foreclosure lawsuit against Merco Group in 2009 for failing to repay the $38.7 million mortgage. The Merco Group had been hit with multiple lawsuits that year on many of its other projects in South Florida and would have to deal with another foreclosure lawsuit a year later on one of their residential projects. The bank took the property in March 2011. By then, the hotel had been overtaken by black mold. Since the bank took possession of the property, the hotel was trashed and covered in graffiti with homeless people camping out in the once luxurious lobby.

The Terra Group bought the run-down hotel for $24 million and $3.4 million for the adjacent office building. The group announced their plan to demolish the Grand Bay Hotel and replace it with two 20-story glass and steel, twisting condominium towers. The project was in collaboration with Nichols Brosch Wurst Wolfe & Associates, the successor of the Grand Bay Hotel’s original architects. Landscape architecture was to be overseen by local designer Raymond Jungles and comprised of more than 15,000 plants, 500 trees, and several water features. Demolition of the Grand Bay Hotel began in December 2012. Construction on the Grove at Grand Bay began in 2014 and was completed in 2016.