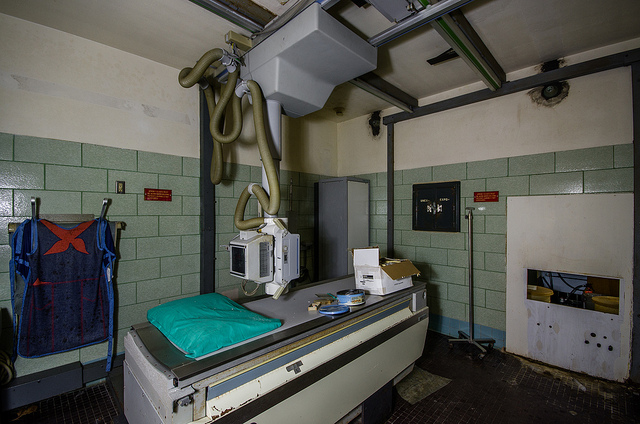 The G. Pierce Wood Memorial Hospital is a former psychiatric hospital located on the grounds of the former Carlstrom military airfield. Carlstrom Field was established in 1917, just south of Arcadia after the United States entry into World War I. It served as an advanced school for pursuit pilots, offering a six-week course with a student capacity of 400. Following the end of World War I in November 1918, activities at Carlstrom were slowly phased out until its closure in 1926.

With the need for primary pilot training brought on by World War II, Carlstrom re-opened in March 1941 under the operation of Riddle Aeronautical Institute. The 53d Flying Training Detachment was activated under then Brigadier-General Junius Wallace Jones, who learned to fly at Carlstrom. A new facility was built adjacent to the remains of World War I-era facilities. Carlstrom Field had a very unusual layout, with a compact group of buildings located inside a circular road, with five hangars located around the southern periphery of the road. No paved runway was ever built with the flying conducted from the 1-square-mile grass field.

Following the end of World War II, Carlstrom Field was shut down and in 1947, it became the site of the G. Pierce Wood Memorial Hospital, named after former Speaker of the Florida House of Representatives George Pierce Wood Sr., an advocate for the mentally ill. In later years though, mental health advocates claimed that the care at the hospital was substandard. In the mid-1990s, the U.S. Department of Justice’s Civil Rights Division investigated G. Pierce Wood after reports of abuse, including beatings and rapes, and deaths of residents. One incident involved a man who the U.S. Justice Department said was frustrated about delays in his release. Although the maintenance building was locked, the man managed to find a ladder and climbed into an upstairs window at night. He used a table saw to cut off both of his hands.

In 1995, the U.S. Justice Department sent a letter to Governor Lawton Chiles outlining nine deaths at the facility. In 1993, a man suffering from delusions and amnesia ran away from the facility, which was unfenced. One month later, his body was found leaning up against a tree one mile from the facility. Another man ran away and committed suicide in a nearby orange grove. A woman also ran away from the facility and was hit and killed by a car on the Pennsylvania Turnpike. At least two patients who were supposed to be on soft food diets choked to death on solid food. One woman was found slumped over a geri-tray chair with her throat and chin on the tray-table top. She was supposed to be supervised but no one was there when she died. Another woman who was also supposed on suicide watch killed herself in August 1994 after an overnight worker never took over after a shift change. By the time her body was found, rigor mortis had set in. One man who also exhibited suicidal thoughts was given full privileges to the facility three days before he killed himself. Finally, one woman was given a deadly dose of psychotropic medication which happened to also be the wrong medication. Other instances involved a man who died of hyperthermia after being left alone for a long period of time in hot bathwater and a 21-year-old man who died just a day after being admitted to the hospital with toxic levels of medication in his body.

The letter also described the facility as overcrowded, understaffed, workers who were poorly trained and failed to protect patients from harm or death, and medical staff who failed to provide adequate treatment or to develop or follow treatment plans. Within six years of the report, the state decided to close the facility stating it was for financial reasons. 300 patients left G. Pierce Wood Memorial Hospital, most of which were transferred to other state-operated mental institutions and community treatment programs. That same year, the state increased funding for community mental health programs by about $30 million due to the large influx of patients, but that funding quickly ran out leaving many patients homeless.

The complex soon became the Desoto County Juvenile Correctional Facility and was operated until 2011. The property remained unused until 2014 when it was sold to Power Auto Corporation for the construction of a racing training facility but that project has stalled. The facility sits empty except for a helicopter repair business. The only remembrance of Carlstrom field today is a plaque on the administration building placed when it was refurbished by the state of Florida in 1992, and a tired B-17 weather vane on top of the building. Two of the World War II hangars still survive as well as the mess hall, bandshell, canteen, water and sewage plants, and two training buildings. The only remnants of Carlstrom Field from when it was in operation during World War I are concrete pads along Highway 31 upon which the wooden hangars once stood.

Due to a large number of trespassers caught at the property, the DeSoto County Sheriff’s Office issued a public notice which starts, “Recently the DeSoto County Sheriff’s Office has seen an increased number of Trespassing cases, which are all related to the same piece of PRIVATELY OWNED property. This property is located on SE Highway 31, formerly known as the G. Pierce Wood Memorial Hospital. It currently seems to be a must-see destination for “Urban Explorers” and “Ghost Hunters” alike. Of the 16+ individuals found on or near the property this month alone, none have reported any paranormal activity. All individuals were, however, educated on Trespassing Statutes, and arrested.” It goes on to say, “Please note this property is properly fenced, with locked gates and visibly posted “No Trespassing” signs.

The property owner has requested anyone found trespassing on the property be PROSECUTED TO THE FULLEST EXTENT OF FLORIDA LAW.”