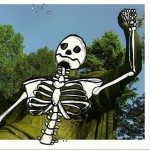 Slender and sandy, Egmont Key strategically guards the primary shipping lane in and out of Tampa Bay. It is home to a lighthouse and has a long history as a US military outpost. During the Third Seminole War, it served as a temporary internment camp for Seminoles. After they were rounded up on the mainland, this was a convenient and isolated way station before their complete removal. In the Civil War, the Union retained control of the islands, using the lighthouse as a watchtower to spot Confederate blockade runners. In this capacity, it was instrumental in Union’s larger war aim of maintaining a choke-hold on a Confederate economy that was highly dependent on foreign trade. But even at this late date, there were no formal military fortifications on the island.

All of that changed with the Spanish American War. That conflict inspired the construction of formidable defenses – concrete batteries, deploying two to three large guns each, capable of lobbing a heavy shells at targets up to five miles distant. The ruins of these heavy fortifications remain along the northwest shore of Egmont Key, crumbling in the heat and humidity of the Gulf Coast sun.

Various underground compartments for the storage of powder and shells suggest an ineffable sense of darkened dread. Little of the sun’s light reaches down here. The guns have long since been removed to the mainland, and their ringing echoes have long since fallen silent, broken now only occasionally by the careless mirth of the great grand children of the servicemen who once tended this place. Frat boys, home for summer break, borrow their fathers’ boats and wander up from the beach, teasing their bikinied girlfriends with a machismo incubated by the intense heat. They say that the girls are too scared to go into these dark rooms, but amidst all the laughter and playful jostling, the guys never make it inside either.

During its lifetime, the base was home to a large storage depot of mines, ready for deployment across the mouth of Tampa Bay in the event of an enemy incursion. In the island’s interior, the jungle swallows whole the support facilities for this mining operation, leaving nothing behind but a digested skeleton of the structures that once housed enough explosives to kill half the island. Their roofs are now comprised of towering palm trees, stretching sunward between block walls, fractured and yet largely intact. None of these formidable facilities were completed in time to be of any use in the short-lived conflict of 1898, mind – the first heavy artillery at Egmont Key did not come online until 1901. By the mid twenties, the entire base had been abandoned, deemed obsolete in an era of increased American isolation.

A battalion of some 100+ US servicemen were stationed here to man these defenses. The army built a large barracks for these men, as well as more substantial freestanding homes for the officers, housing for civilians, segregated housing for African American laborers, and an elaborate infrastructure to service the logistical needs of the quartermaster. Most of this town is gone today, replaced with chaotic plots of heavy jungle growth, neatly framed by a grid of idyllic red brick streets that still looks pretty good after a century of sun and hurricanes. But no matter how well they have aged, all roads on Egmont Key lead to the sweet oblivion of wilderness. This may be the most profound insight offered by the ruins of an island fortress conceived in preparation for a war that never came – no matter how well men and nations plan for their continued mastery of all who would challenge their dominance, nature gets every last one of them in the end.

In fact, this proposed maxim is more true today at Egmont Key than ever. This whole island is sliding into the Gulf of Mexico at a startling rate. It’s been here at the juncture between the Gulf and Tampa Bay since at least the time of Spanish exploration, some five hundred years ago. In the 1850s, a survey by the US Army (conducted by a younger Robert E. Lee) found the island to have an area of 580 acres. As of last year, Egmont Key topped out below 250 acres. These sandy keys along the Florida coast come and go, to be sure, but Egmont Key seems to have hit some kind of tipping point during the last decade. Already, several ruins are only accessible with the aid of a snorkel. Experts say that the whole island could be gone in a few years if the right hurricane struck. The state has placed several temporary retaining walls along the northwest shore of the island, but in reality, this is only a stopgap measure, no more a contingency against the inexorable sands of time than the once mighty ruins that call this island home.