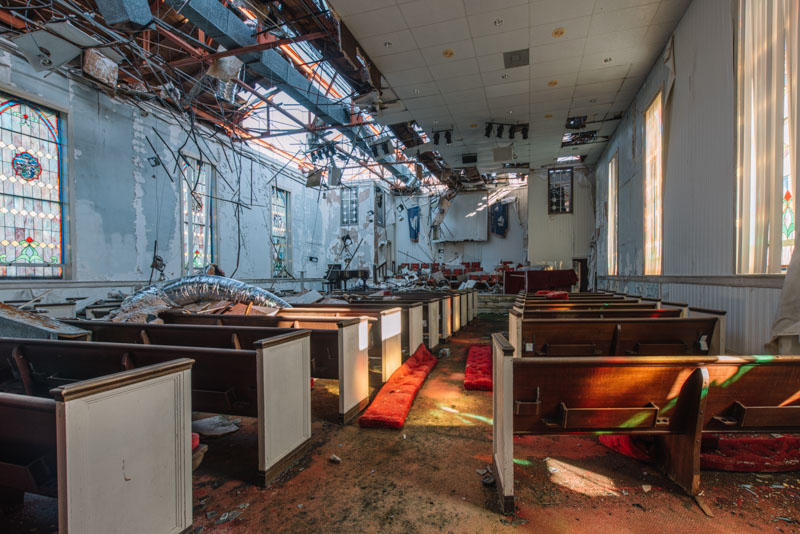 First Baptist Church of Port St. Joe was founded in 1923 by a group of 12 people with a shared vision, “to glorify God by seeking to make all people disciples of Jesus Christ”. L.E. Goodgame served as the church’s first pastor as well as the pastor of the First Baptist Church of Sopcoppy and Auburn Baptist Church. Over the years, church membership has grown to over 700 members. In 1959, a new sanctuary and educational center were constructed at the corner of Monument Avenue and 3rd Street.

On October 10, 2018, Hurricane Michael extensively damaged the community of Port St. Joe including the First Baptist Church building, tearing off portions of its roof, flooding the interior, and knocking its steeple to the ground. The first church services held after the storm took place on October 14 in a nearby parking garage. The building was deemed salvageable and laid empty until the church could make a decision on what to do with it. A lot wasted away within its walls from boxes of art supplies still in its packaging to roomfuls of children’s toys. Black mold was prevalent throughout as water ran down from the ceiling and soaking into the dark black carpeting. An unsightly number of cats laid dead and decaying inside as a colony of feral cats had made the building their home.

Over a year later, the building is being demolished to be replaced with a new building for the church. The stained glass windows which were donated to the church by Cecil G. Costin Sr., a former attorney and Democrat House Representative, will be saved and reused in the construction of the new building.