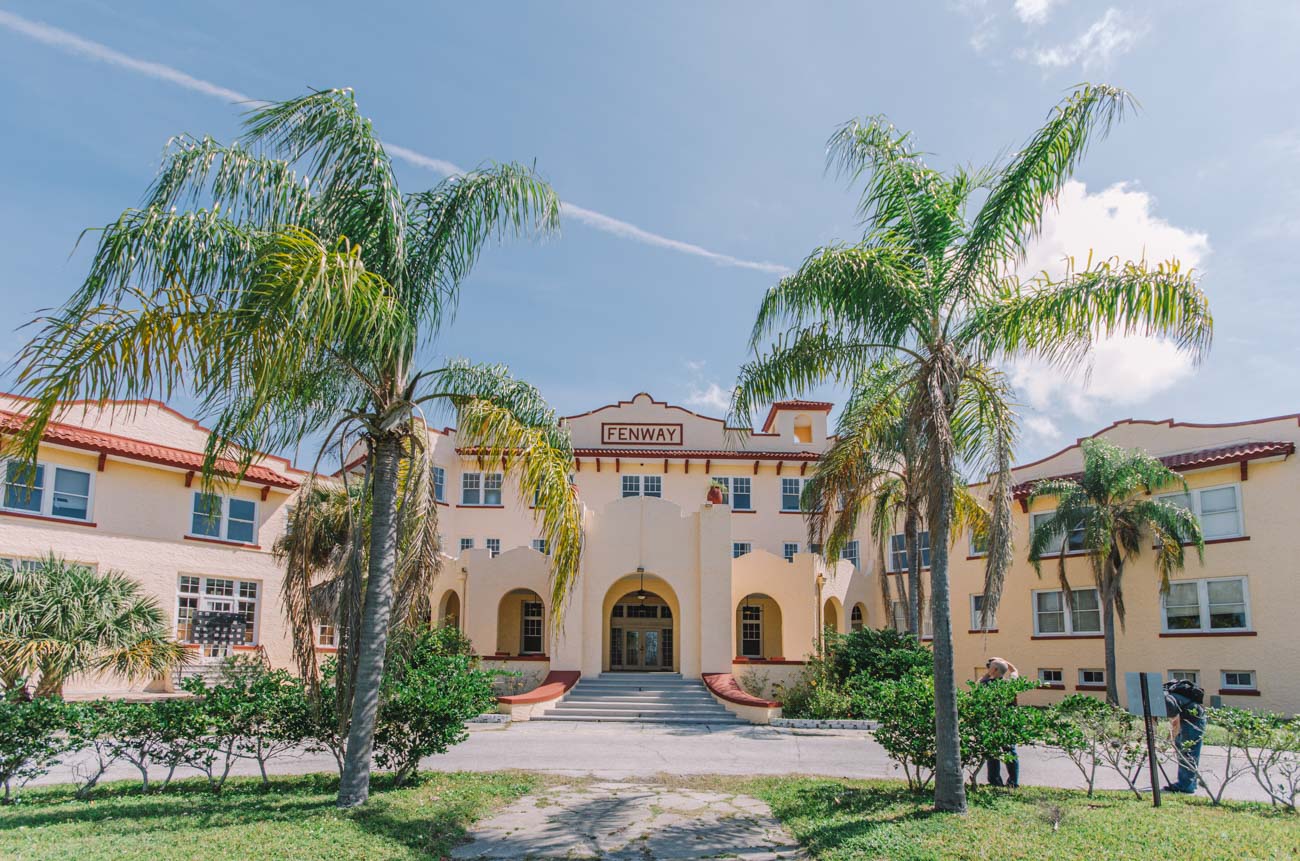 Construction on the Fenway Hotel began in 1924, but the project stalled due to financial problems. It wasn’t until Clearwater developer, George H. Bowles, decided to invest in the hotel for a controlling interest. Construction on the hotel was finally completed in 1927. Designed by Herman Everett Wendell who also designed the Suwanee Hotel in St. Petersburg, the Tampa Bay Times called the hotel building Dunedin’s “most historically valuable structure.”

The Fenway Hotel was operated seasonally and hosted many guests during the winter months, including Harley M. Kilgore, Stephen Early, Charles Kettering, Kenesaw Mountain Landis, Alf Landon, Clarence Darrow, and Alanson B. Houghton. The hotel was also home to radio station WGHB, the first in Pinellas County, and was the precursor to WFLA. As a private club in the 1950s, the hotel hosted an exclusive clientele of mostly Northerners during the winter months, changing owners in 1956 when it was bought for $300,000.

In 1961, the hotel became home to Trinity College, an evangelical interdenominational Bible college. When Trinity College moved to Pasco County in 1988, the building lay vacant until 1991 when it was bought by Schiller International University. They moved out in 2005.

Servants’ quarters were located on the second floor where there are two bedrooms and a shared bathroom. Call buttons are located in each bedroom and throughout the house and are connected to an annunciator panel in the kitchen. The call buttons would be used to summon the servants.

Seasonal rental of the cottage was common. Seasonal guests include Samuel H. Kress, founder of the S. H. Kress & Company chain of retail stores, who stayed at the cottage between 1944 and 1946. James H McGill, the founder of McGill Manufacturing Company of Valpariso, Indiana, also made a visit to the cottage in 1941.

The Fenway Hotel was bought once again by George Rahdert, a St. Petersburg lawyer who represents the Tampa Bay Times, who planned on restoring and expanding it into a high-end resort. The plan called for adding two independent wings, creating “a hotel with 132 rooms, a spa, a ballroom, and a 150-seat restaurant, all surrounded by lush landscaping and a 6-foot-tall masonry wall,” Due to neighborhood opposition and the poor economy at the time, the project stalled and the property eventually went into foreclosure.

In 2013, Pennsylvania hotelier James Bower and his daughter Christy Bower had plans to raze the building and rebuild it in the same architectural style, but the plans fell through the PNC Bank failed to respond to his offer. A new plan was submitted the following year which included razing and rebuilding the hotel, but also having it raised off the ground on top of a parking garage and adding townhomes behind the building.

As their plan stalled, the Taoist Tai Chi Society of the USA saw an opportunity to turn the property into their national headquarters. On June 13, 2014, the property was purchased for $2.8M and renovations began in June 2015.

After hearing feedback from the community though, the Taoist Tai Chi Society decided to partner up with a Tampa-based hotel developer instead to make the space double as a one-of-a-kind boutique hotel, complete with more than 100 public rooms, a bar, a pool, and a restaurant. Under a 25-year lease agreement, the hotel will be added to the Marriott International Autograph Collection, a chain of 115 luxury hotels that the company calls “exactly like nothing else.” Restoration work on the former hotel was completed in 2017 and today, it operates as the Fenway Hotel, a 65-room, 18-suite, 4-star hotel containing, a steakhouse restaurant, and a rooftop bar.