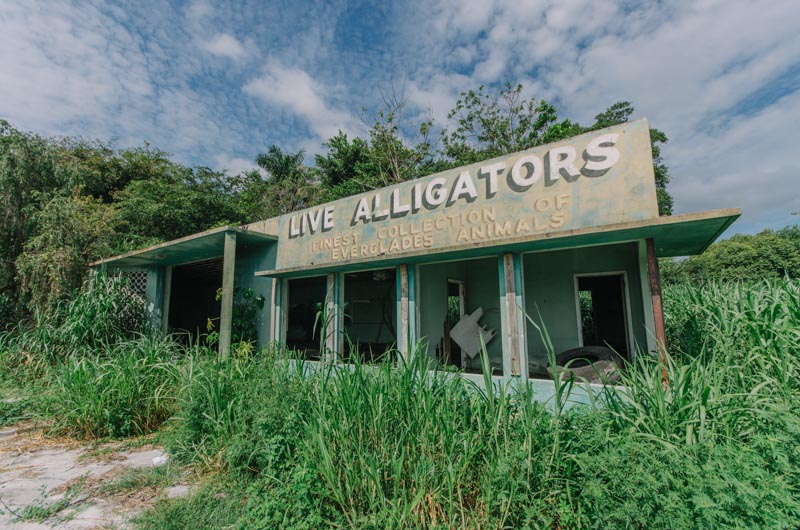 Everglades Gatorland, not to be confused with Gatorland in Orlando, was a small attraction located just within the city limits of South Bay. Beginning in Miami’s Little Havana and ending at the small town of Havana, FL near the Georgia border, Highway 27 was the road in which millions of post-war tourists and migrants first ventured across the state. Now just a long stretch of road spanning across miles of sugar fields, it was once the backbone of Florida’s tourism industry; before Disney World existed and odd roadside attractions were the norm.

Just south of the town of South Bay on US 27 are what remains of Everglades Gatorland, a small roadside zoo that became known for their live alligators. It began as a gas station run by J.C. Bowen, former mayor of South Bay and his wife Mary Lou. Because tourists who stopped at the station would ask where they can see alligators and other native Florida animals, they started Gatorland in 1959 with alligators caught in the lake just behind the building. They would eventually expand and acquire exotic animals such as ocelots, coatimundi, and a king vulture.

In the 1960s, alligator poaching had gotten out of hand. In 1965, poachers used a .22-caliber rifle to shoot and carry off three alligators from Gatorland while the night watchman was off-duty. The American Alligator was put on the first endangered species list in 1967. That same year, Florida was the first in the country to establish new regulations for captive animals which covered minimum pen size for each group of animals, sanitation, and animal care. These new regulations put many roadside zoos out of business, but Gatorland was able to meet the requirements and stay in business. The establishment stayed strong throughout the 70s and 80s. By the 90s though, there weren’t any gators left as the time and cost to care for them wasn’t worth it. Mary Lou Bowen is quoted in a 1991 Sun-Sentinel article as saying “We want to sell,” in regards to the building which, by that time, was overgrown with bottle-brush trees. Business wasn’t booming anymore as the Bowens continued selling souvenirs to the rare tourist who would use the restroom or ask for directions.

For years near the lake where the alligators were caught, the concrete pens and cages which held the animals laid abandoned in the Florida sun and the old souvenir shop sat on the side of Highway 27, gutted and overgrown, with a faded sign still advertising “Live Alligators”. The building was demolished in October 2020 as well as remnants such as the old alligator pits, now just a memory in the hearts of minds of not only those who visited it while it was in operation but the hundreds of people who stopped to get a glimpse of old Florida.