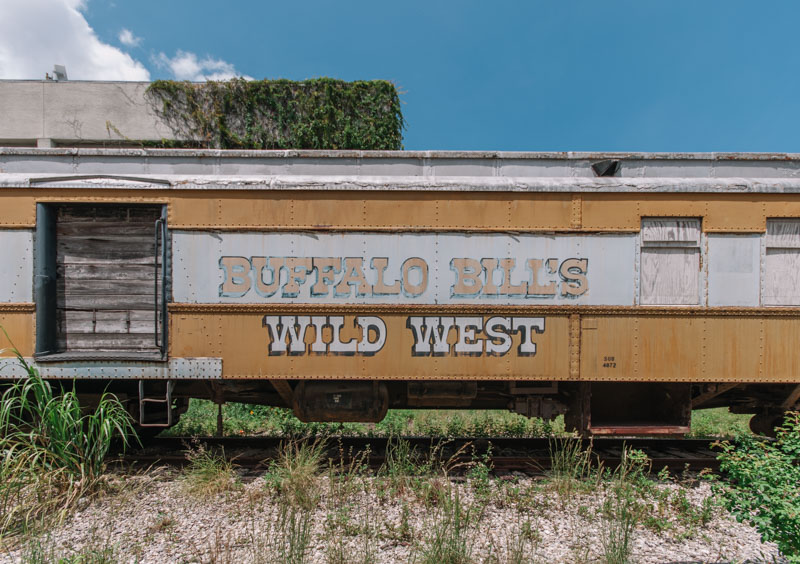 Named after the failed project it was involved in, the Dorothy Walker Bush Great Floridian 2000 was a collection of old rail cars that ended up behind a warehouse in Hialeah. The train included the 1924 FEC Engine 253, the Myer and Morn, a mail car used in Buffalo Bill’s Wild West show, a “Jim Crow” segregation-era car, and a former ice cream parlor housed within a Direct Orient Express rail car.

Built out of an old hospital car in 1951, the General Albert J. Myer SC-1 communications car (labeled POTUS-1), replaced the older ‘Car 1401’ which always accompanied the presidential train car, Ferdinand Magellan. Following the Myer was the Morn (labeled POTUS-2), also built from a hospital car and was the living quarters for the personnel of the Myer. It included a small kitchen, bunk beds, a small bathroom with a shower, and a living area. No photos of the interior of the Morn in service have been found as ordered by the Colonel in charge.

Here’s description of the Myer from a piece done by Cryptome:

The Radio car was a converted something and appeared to have been gutted and then built as required. There was a window installed so the operation could be viewed from the hallway that passed between the rail cars. As you were sitting at the console behind you, there was a large glass window which was by the walkway on the left side of the car. Looking out that glass window past the walkway was another large glass window which was on the car body. If anyone on the platform were to look into the car window, they would see the whole console and operators.

When the Ferdinand Magellan was taken out of service in 1958, the two communication cars were moved to the New Cumberland Army Depot in Harrisburg, PA in the 60s and 70s. The railcars made their last official trips when President John F. Kennedy went to the Army-Navy football in Philadelphia in 1961.

Railroad Car 2409 was built in 1912 by the Pullman Co. as a palace car for the Richmond, Fredericksburg, and Potomac Railroad Line to carry dignitaries between Richmond, Va., and Washington, D.C. The train car was rebuilt between the 1920s and 1930s which included the addition of air conditioning.

During World War II, it underwent another change in look and personality when it was sold to the Clyde Beatty Circus as a pie car, where performers or crew members could buy food such as soda, chips, or ice cream during their free time. The car was moved to Fort Lauderdale where the circus maintained winter headquarters on Sunrise Boulevard at what is now the Gateway Shopping Center. In the 1950s, the car was sold again to Royal American Shows, at the time the largest midway in North America. Still used as a pie car, it spent its last 30 working years traveling from the carnival`s winter headquarters in Tampa to state fairs in the Midwest and Canada. In the early 80s, railroad costs rose prompting Royal American to switch to trucks and the retirement of the railroad car.

The train car sat derelict in a Tampa woods until Richard Winer, known for his books on haunted houses and the Bermuda Triangle, found and bought it for $3,500 in 1983. He moved it by rail to a siding at William Thies and Sons, a beer distribution plant in Wilton Manors, Florida, and began work on it in November 1986. After completing its restoration in 1987, he convinced the Fort Lauderdale City Commission that Car 2409 would complement the planned River Walk and help keep people downtown, opening the Direct Orient Express ice cream parlor at 150 W. Broward Blvd. Two years later, he was evicted to make room for a 1,200-car parking garage and moved the railroad car into storage.

Tony Campos, a Cuban immigrant and former corrections officer, worked as an advance man for George H.W. Bush during his presidential run in 1988. Jeb Bush recommended Campos for a job in his father’s new administration and from then on, Campos would cultivate a relationship with the Bush family, especially with Dorothy Walker Bush. Several years after her death in 1992, Campos took advantage of his friendship with the Bush family and their love for Dorothy.

In 1999, Tony Campos wrote a letter to newly-elected Governor Jeb Bush about his plan to commemorate Dorothy Walker Bush involving a small museum, in her name, within a train station in Hollywood, Florida where she had once arrived on the passenger train the Orange Blossom Special. In 2001, it was announced that Dorothy Walker Bush was designated a “Great Floridian 2000,” as she was nominated by Campos for his much larger plan. Great Floridian nominees are recognized for their contributions to the community, the state, and the nation. Jeb Bush did not approve of the designation, writing in an email to Campos, “She would be turning over in her grave on the designation.”

As part of Campos’ project, he propositioned putting together a train dubbed “Dorothy Walker Bush Great Floridian 2000” to be showcased at the rail museum when it opens. By 2007, the project had received over $1.2 million in grant money, $745,000 of those being from the state. In 2006, Campos acknowledged the restoration wasn’t going to be completed on-time and cited hurricanes, a break-in, sketchy historical documents, lack of grant money, and a PBS documentary crew’s delay in filming the project.

In October 2006, the Florida Division of Historical Resources sent a letter to Campos asking about the expenditures of the grant money. Campos then disappeared; he never responded, never answered phone calls, and was hardly ever at his office at the train station. It was requested he return the money or face legal action. An investigation began in 2007 and found hundreds of thousands of dollars were being diverted from the project for Campos’ personal use, among his purchases being thousands of dollars in G.I. Joe and Barbie dolls. He was arrested and accepted a plea agreement in 2013, having sentenced to probation and ordered to pay $375,000.

What’s left of the failed project sat rotting away behind a South Florida warehouse. Among them are two train cars thought to be presidential trains cars, with the names “POTUS I” and “POTUS II” stenciled on the sides of cars, sit on wood blocks at the front of the tracks. Attached is a 1918 Buffalo Bill’s Wild West Show postal car, the Direct Orient Express ice cream parlor, and a “Jim Crow” segregation-era car. The state they are in is abysmal; holes in the floor from where scrappers have cut their way into the train cars, graffiti covers the walls, and a lack of windows where the ones that do remain have bullet holes in them.

As the Florida East Coast Railway (FEC) owned the train and the tracks they sat on, they offered to give it away to anyone willing to pay for transport. In June 2016, it was found that the rail cars were no longer there with their whereabouts unknown, although it’s almost certain they have been scrapped or destroyed. You can read about the Dorothy Walker Bush Great Floridian 2000 and many other abandoned places in my book, Lost Miami: Stories and Secrets Behind Magic City Ruins.