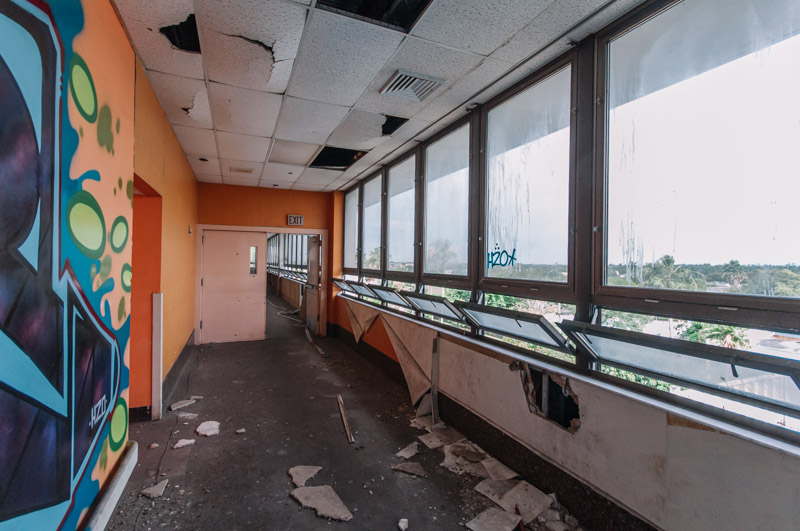 Located on Sunrise Blvd. in Plantation, Florida, it was built in 1962 ‘Doctors General Hospital’ and was the first to open in Broward County’s suburbs. The hospital and doctors were the focus of a much-publicized malpractice lawsuit involving diametrically opposing views of the cause of an infant child’s injuries with one side accusing the hospital of malpractice and their inability to diagnose the child with meningitis, and the defense saying the child’s brain hemorrhaging was caused by child abuse. The case spanned over a decade and involved three hospitals, nine doctors, and a plethora of witnesses.

Tenet Healthcare, the nation’s second-largest hospital chain, acquired the 202-room hospital in 1996 after taking over the ORNDA chain, and renamed it ‘Florida Medical Center South’. The hospital was closed in April 1998 though, because only about 20 percent of the rooms were filled as well as there being three other hospitals within 2 miles of it, including its sister Florida Medical Center in Lauderdale Lakes.

In 1999, talks emerged about selling the abandoned building to a potential buyer and was finally sold in 2001 to Federation School Lands LLC for an undisclosed amount. It continued to lay vacant and was vandalized throughout the years. Even though there was still power running through the building, scrappers ripped out wiring and pipes in the ceilings and had even drawn maps on the walls to mark where the best place to cut the power was. Cabinets on the third floor were filled with spray cans and graffiti was found along every floor. Signs outside the building indicated it was used for police training; a couple of blank casings and police tape were also found inside. Some of the hallways on the north end of the hospital ended abruptly and were barricaded over and old satellite footage shows markings of what was probably a walkway connecting the medical center to the neighboring building, now a school.

In 2011, the property was sold to Renaissance Charter School for $5.5 million. The building was demolished in 2012 and was replaced with another building for the school.