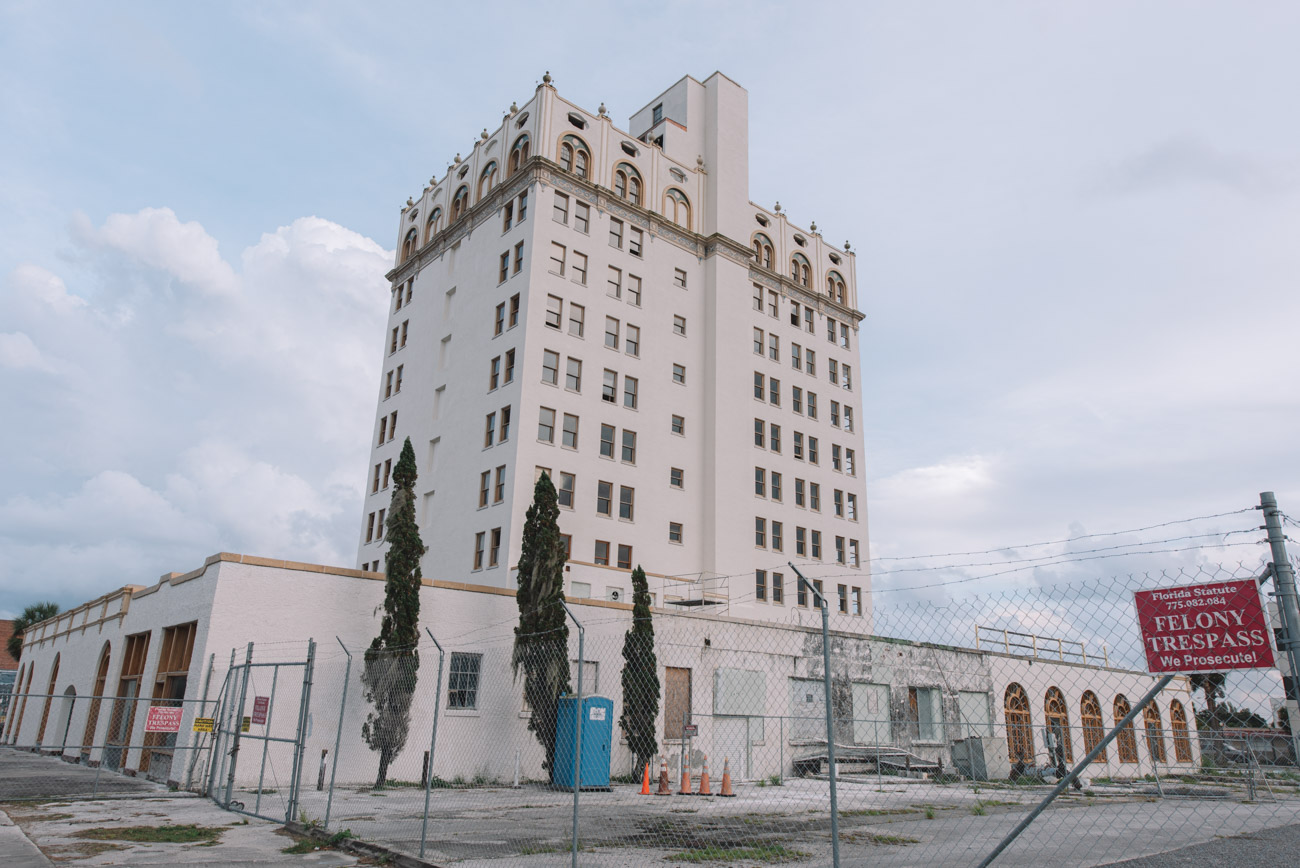 The Walesbilt Hotel, also known as the Dixie Walesbilt Hotel and Hotel Walesbilt, is one of a small number of skyscrapers built in the 1920s that still stand today and is a prime example of how optimistic people were during the Florida land boom. Throughout the years since its construction, it has gone under several renovations and name changes such as the Groveland Motor Inn, the Hotel Royal Walesbilt, and the Grand Hotel. Built in 1926, it found financing through a stock-sale campaign in the local business community at the cost of $500,000.

The building architecture, masonry vernacular with hints of Mediterranean-Revival, is also a good example of the time it was built. It was designed by two well-known architects at the time, Fred Bishop who designed the Byrd Theatre in Virginia, and D. J. Phipps, who designed both the Wyoming County Courthouse and Jail and the Colonial Hotel in Virginia. The hotel was constructed using the “three-part vertical block” method, which became the dominant pattern in tall buildings during the 1920s. Three-part buildings are composed of a base, shaft, and cap, all noticeably visible.

The hotel opened as the “Walesbilt” on January 14, 1927, two years before Edward Bok’s famous Bok Tower was completed nearby. A contest was held to select the name of the hotel. The winning name was submitted by Elizabeth Quaintance, the second executive secretary of the city’s chamber of commerce. The hotel was also completed shortly after the land boom had started to collapse and two years before the Great Depression began. Original owners included then Governor Martin of Florida and silent screen star Thomas Meighan, actors and actresses including Mary Pickford, Gloria Swanson, and Clara Bow, as well as famous Hollywood attorney Nathan Burkan and Hollywood Producer Victor Heerman.

In 1972, the City of Lake Wales released its plans to beautify and redevelop the city’s downtown area. Upon completion, the project costs totaled $500,000 with 70% being financed by the city’s taxpayers and the rest by the area’s business owners. With this in mind, the hotel was purchased by Anderson Sun State, owned by E. E. Wilson and a trustee of the group, and renamed the “Groveland Motor Inn.” The firm completely renovated the hotel. All the wiring, plumbing, and fixtures in the building were replaced, air conditioning was installed, the building’s exterior was repainted, and new furniture was bought.

The hotel was used to host visitors to the area who were interested in Green Swamp; land that was sectioned off for land development. At the time there was heavy speculation in the land because of its close proximity to Walt Disney World and was selling for around $5,000 an acre at the time. That ended after a state cabinet designation of the swamp as an area of critical state concern, placing the land off-limits to any large land developments.

After operating for less than two years, the building was foreclosed and the hotel was auctioned off in 1974. Despite RCI Electric purchasing the hotel, it remained empty for many years afterward.

In 1978, the hotel was signed over to the Agape Players, a nationally known religious music and drama group, who would assume the mortgage and would pay the costs to make improvements to meet city fire and safety standards. The hotel was renamed the “Royal Walesbilt” and after extensive improvements were made, it became the headquarters for the Agape Players; using it as a teaching facility and the base from which the group launched their tours. In addition, they operated a restaurant, an ice cream parlor on the lobby floor, and a “Christian hotel” on the upper floors, catering mostly to groups. The Agape Players disbanded in 1985 and put the property up for sale.

Victor Khubani, a property investor from New York acquired the property and renamed it the “Hotel Grand.” The hotel closed briefly in December 1988, due to a variety of code violations and causing the owner to later pay $14,000 in fines. This was just the start of multiple issues and violations found in the building throughout its short-lived operation. On August 31, 1990, it was added to the National Register of Historic Places. In October 1991, The State Fire Marshall’s Office gave the owner one year to install a new sprinkler system and in May 1993, the code enforcement board gave Khubani until March to complete the work.

In March 1994, the hotel closed due to multiple code violations and was to remain closed until a new fire sprinkler system was installed. To reopen, the fire escapes and elevator, which did not function, would have to be repaired as well. In 1995, the hotel was auctioned off to a redevelopment firm, which dismantled part of the interior for reconstruction, which was never completed.

Since then, the hotel has deteriorated, becoming an eyesore to many of the residents of Lake Wales and nicknamed “The Green Monster” for the greenish color it has acquired over the years. In 1995, it was even jokingly mentioned to become a sacrifice to “the bomb,” an economic boom that occurred in parts of Florida where movie production companies would pay cities to blow up buildings for their movies. In 2007, the city foreclosed on the structure for more than $700,000 in unpaid code fines, with hopes of finding someone to restore it.

The development firm Dixie-Walesbilt LLC announced plans to restore the hotel, signing into an agreement with the city of Lake Wales in February 2010. By the agreement, the city would retain ownership of the building until a defined amount of work had been accomplished. The work must be completed within 16 months and the amount of money invested must succeed at least $1.5 million. The building would then be handed off to the Dixie Walesbilt LLC, where they may continue with private funding or other methods for debt funding.

Ray Brown, President of Dixie Walesbilt LLC, planned to invest $6 million into the renovation, with original plans to put retail stores on the ground floor and use the upper floors for as many as 40 condominiums.

On June 2, 2011, the city of Lake Wales agreed to deed the building off to Ray Brown in a 4-1 vote, after meeting the requirements of the redevelopment agreement. Though Brown submitted a list of costs to the city totaling $1.66 million, Mayor Mike Carter wasn’t satisfied with the results so far, pointing out that Brown failed to repair the windows and repaint the building. Previous owners had put tar on the building and then painted over it, so much of Brown’s investment went to stripping the tar off the exterior walls.

To repaint the building, Brown would also have to resurface the hotel with hydrated lime to replicate the original skin, as well as the window frames, which would need to be constructed of Douglas fir, red cedar, and gulf cypress. According to Brown, previous owners who renovated the building rarely removed the building’s original elements; the intricate tile flooring had been carpeted over, tar paper was stuck to the skylights, and placed modern drinking fountains in front of the originals. Brown estimated about 98 percent of the building is still in its original form.

Restoration of the building’s exterior began in January 2015 and included surface repair, pressure washing, paint removal, chemical treatment, and a comprehensive resurfacing of the exterior.

While the original plans were for turning the building into condominiums, that has since changed and current plans call for operating the building as a boutique hotel. The hotel will feature geothermal cooling as opposed to traditional air conditioning, a permanent art gallery as well as theme gallery showings throughout the year, and the best WiFi/internet in the city. The project is expected to be completed in 18 to 24 months.