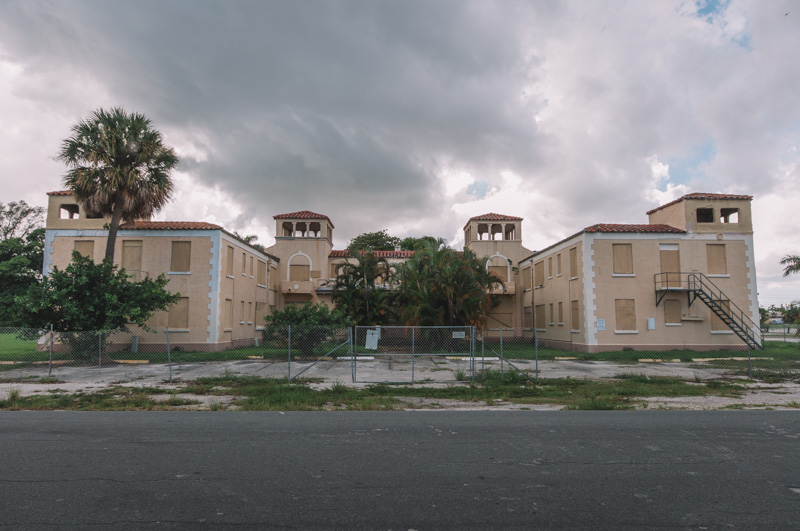 The Dania Beach Hotel was built in 1925 during the Florida land boom and was designed by renowned architect Francis L. Abreu. Abreu was born in 1896 to Diego and Marie Jova Abreu, owners of a Cuban sugar plantation, and also kept a home in upstate New York. He enrolled in Cornell University to study architecture, enlisted in the Navy during World War War II, and graduated from Cornell in 1920. After graduating, he moved to West Palm Beach until 1924, when he moved to Fort Lauderdale, where his parents had relocated to, and became the second registered architect in Fort Lauderdale.

Abreu was a prolific designer in the city’s land and real estate boom of the 1920s. Although he was only in South Florida for a short period, between 1924 and 1928, its estimated Abreu was responsible for half of the construction in Fort Lauderdale at the time. Many of his works survive to this day, although a small percentage are documented since many have been torn down or altered beyond recognition. He is best known for his architectural style of blending Spanish and Mediterranean influences with the use of barrel tile roofs, twisted columns, arched walk-ways, antique lanterns, iron gates, and heavy dark wooden doors.

During the Dania Beach hotel’s heyday, it was a popular destination for tourists heading to the beach, the surrounding Downtown area, and the Dania Beach Jai-Alai across the street, with some stories even claiming that Al Capone once stayed here. It’s also interesting to note that the hotel survived through the devastating Miami hurricane of 1926, which had caused $157 million worth in damages, which estimates to about $1.7 billion today.

In 2000, the property was granted historic designation by the city. As years passed though, the condition of the hotel deteriorated and the owners were given numerous citations for failing to maintain the property. The hotel’s condition worsened until it was declared unsafe and forced to close in 2005. The 40 tenants living there at the time were evicted, most of which were single men, some with mental illnesses, who scraped by on low-paying jobs.

The city forced the owners to board up the building after squatters were found living inside. For years, city officials have wanted to bulldoze the surrounding neighborhood, where drug dealers and muggers loved hanging out. The owners, hoping to sell the property to potential developers, have racked up more than $72,000 in code enforcement fines since it closed.

In early-2009, the Dania Beach City Commission agreed to waive the outstanding code enforcement fines under the condition that the owner demolishes the structure within 90 days. Demolition costs were initially projected to cost $40,000 but increased to an estimated $110,000 after asbestos was found inside the building. Not being able to adhere to the conditions, the city requested a foreclosure on the property in an attempt to recover the outstanding lien.

In July 2011, the Pirate’s Inn located just down the street was demolished in an attempt to restore the downtown area and with hopes that the empty lot would attract developers to the area. Built in 1939, the Pirate’s Inn originally opened as the Katherine Hotel, named after the daughter of city pioneer and developer Martin Frost, and like the Dania Beach Hotel, was a historic landmark but also an eyesore. The Dania Beach Hotel demolished soon after in February 2012. The lot remained empty for a few years until it was replaced with an apartment complex.