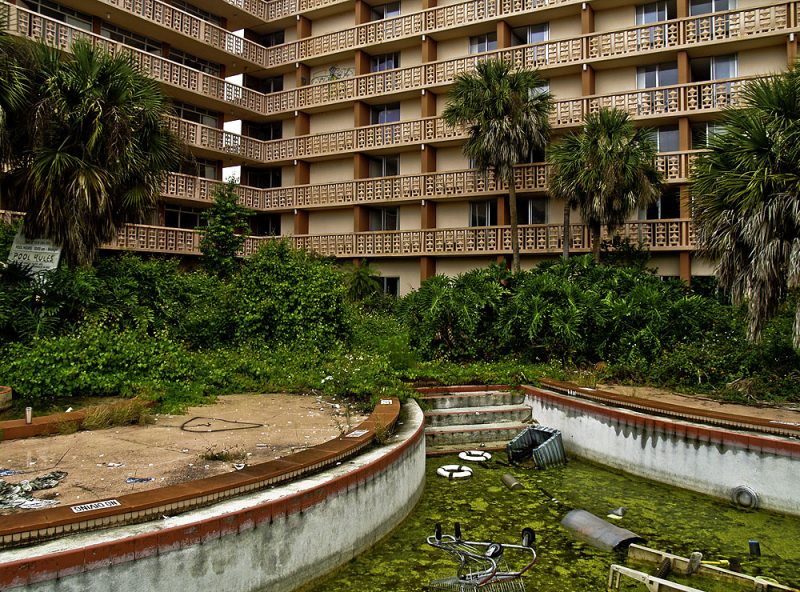 The Colony Plaza Hotel was originally built as a Ramada Inn in 1968 in Ocoee, Florida. The hotel contained a a lounge, swimming pool, tennis courts, and meeting rooms. It was also the first hotel in Orange County to receive a license to serve liquor with meals on Sundays.

The site also served as a temporary headquarters for Disney officials who hosted a press conference in 1969. As someone put it, a “giant circus tent” was set up outside the hotel and invited guests were able to preview the upcoming opening of Walt Disney World Resort. Roy Disney, along with Disney legends Card Walker, John Hench, Charlie Ridgway, and Donn Tatum signed autographs and spoke announced October 1, 1971 as the opening date. Roy told guests at the event:

“You should know that the dedication of our staff to Walt’s goals is tremendous. And I know Walt would like what his creative team is doing because these are the ideas and plans he began. Everything you will see here today is something Walt worked on and began in some way. And today, the Walt Disney organization is dedicated to carrying out these wonderful plans in Walt Disney World.”

As hotels started being developed to directly support Disney, the hotel declined, changing hands numerous times before it finally converting into the Colony Plaza condominium complex and a portion of that being converted into a time share in the 1990s. In 2001, the city condemned the building after malfunctioning sprinklers flooded the first four floors. Apparently, it was marketed overseas which had let it fall into disrepair.

The city attempted to demolish the structure multiple times over the years that followed but ran into legal issues related to a longtime lien on the property, as well as the building’s fractured ownership which according to the mayor, had over 500 owners. On May 9, 2009, with hundreds of spectators to witness the event, the city demolished the building.