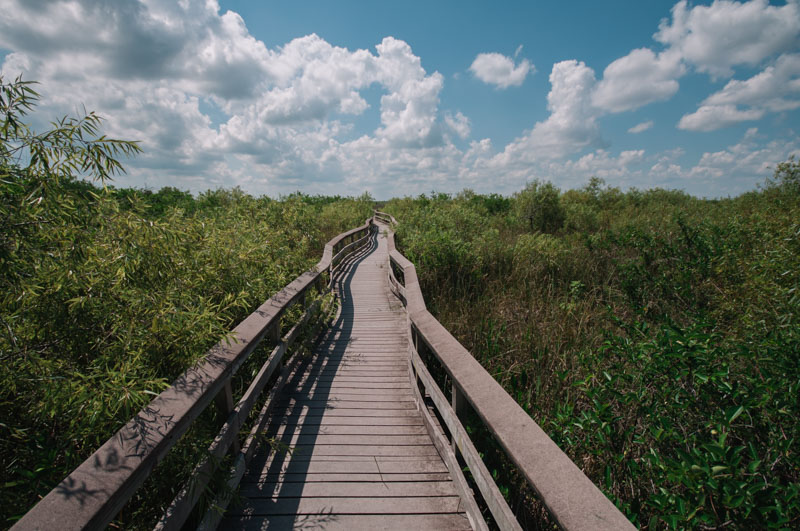 Chekika was first purchased by Samuel Grossman back in 1917 where he attempted to grow tomatoes and then tried drilling for oil on the site. While drilling for oil, the Upper Floridian freshwater aquifer was punctured and water smelling of sulfur rose from the well. A soil dike was built to contain the water and it became a swimming lake and later on, created two additional fishing ponds.

In the early 1950s, Mark Grossman landscaped the area, built a structure around the well to create a fountain, and opened a park for the purpose of bathing in the mineral springs which some believed had healing powers. The park was called Grossman Mineral Springs and Lake Chekika.

In 1970, the state of Florida purchased the land and opened the Grossman Hammock State Park, later renamed Chekika State Recreation Area in 1974. Sometime in 1985, the spring was capped to avoid any more of the sulfur water getting into the Biscayne Aquifer where South Florida gets its drinking water from. The state donated the land to the National Park Service and in 1991, it became part of Everglades National Park as part of the Everglades Expansion Act in 1989 which included the Shark Valley area.

Chekika offered a quiet day of relaxation in the Everglades, with picnicking opportunities and a short hiking trail through the hammock. It was also a good staging location for bicycle rides along the paved roads and canal banks in the East Everglades section of the park. There were no concessions, though bathrooms were available. Barbecues were provided and chickee huts were available on a first-come, first-serve basis.

On December 11, 2013, it was announced that Chekika would close indefinitely due to budget cuts. According to Everglades National Park Superintendent Dan Kimball, “We wish we did not have to close the Chekika Day Use Area, and we know a lot of people will be disappointed, but we had to make some difficult decisions regarding park operations. The realities of the current budget situation do not allow us to operate as we have in the past. We do not have sufficient funding to operate and maintain all of our buildings, grounds, and facilities, and Chekika was selected for closure based on the highest resource priorities and service to the most visitors.” Looking at current satellite imagery of the area, the buildings have since been torn down and cleared.

An horrible loss, as a winter resident since 1987 I used to cycle out there several times a week. Abundant wildlife, and lots to see, except during Easter weekends, unruly crowds. This wonderful place is why I located in winters nearby in the Redlands.