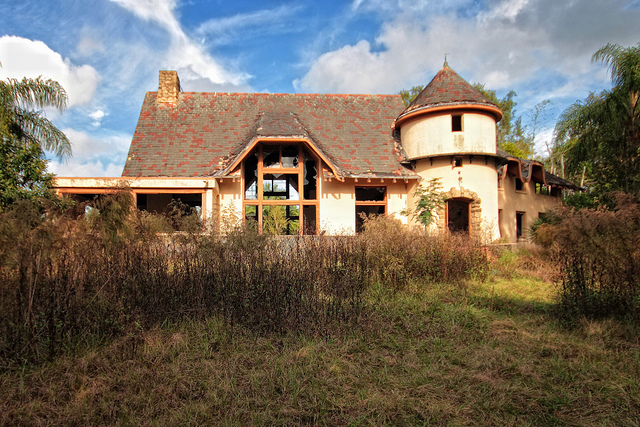 North of John’s Lake in Clermont is a wooded area known as “Castle Hill”, named after a mansion built there years ago and of course, its resemblance to a castle. The house was built in 1927 by Louise Bovingdon, daughter of George A. Thorne who was the son of George R. Thorne, co-founder of Montgomery Ward. George A. Thorne was a vice-president of the company. At the time, this was the world’s largest mail-order house. The mansion grounds were extensively landscaped and were surrounded by 150 acres of woods. Most of the workmen and supplies of the Bovingdon house came from Clermont; A.G. Moore was contractor, E.B. Cashwell did the stucco and plasterwork, and the hardware came from Clermont Hardware.

Louise Bovington became a leader in cultural affairs, often hosting musicals and other events to help benefit local organizations. She and her daughters traveled extensively and lived in France for some time. Following her death, her estate was sold to Kimball Marshall of Chicago in 1938. The property was sold to Joseph Austin in 1978. Austin was a gardener who owned a large number of greenhouses on the property containing a large variety of exotic plants, which later burned down. He sold the property in 1984 to Larry and Charlene Smith who lived in the home for 22 years before selling the property in 2006 to a land developer. At the time, the property was worth over $10 million.

Many locals claimed the house used to be a brothel way back in the day. According to Clay Conner, “the house was raided in 1966 or 1967 by Willis McCall for something like prostitution or pornography. I found the original article at one time. According to an April 1967 Orlando Sentinel article, Lake County Sheriff Willis V McCall lead in a midnight raid on this large John’s Lake home known as Castle Hill. During the raid, 29 people were arrested.” Heavily vandalized, the house on Castle Hill that the area was named after was ultimately forgotten. After multiple fires, it finally met its demise in 2013.