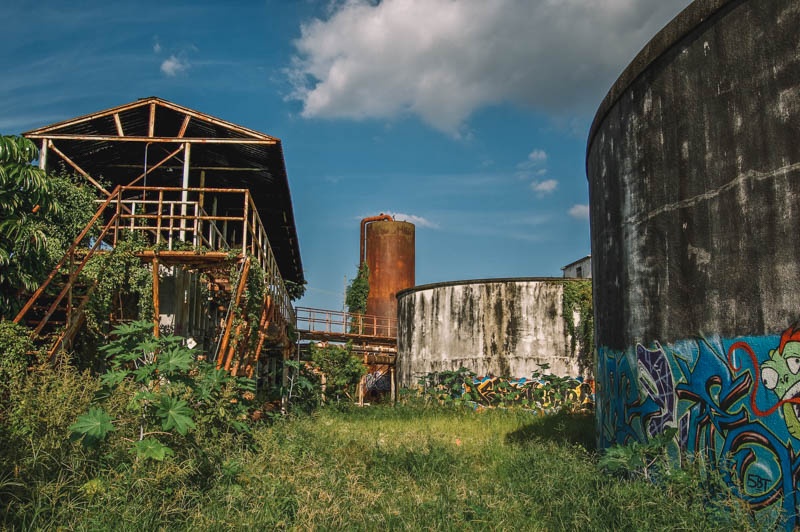 The water plant complex, which was located at 1021 Burlington Street, was built in the 1930s and supplied water to the city Opa-Locka. In the 1950s, the plant was expanded to keep up with the increasing demand.

In the early-1980s, budget cuts were made as the cost to run the plant increased. In April 1985, plans were talked about to renew the plant’s certification when it would expire later in the year and to renovate the plant to reduce the cost to run it. 2 months later, the main water line burst and left the city without water for 8 hours. This event may have been a factor in the city’s final decision.

The Burlington Street water plant closed in 1985 after it’s 50-year certification expired. Since it’s closing, it became a haven for the homeless and drug dealers. An eight-foot-tall hole in its fence led to an unkempt lawn, where the grass grew up to 14 inches in some spots. Inside, old newspapers, soiled clothing, and make-shift beds littered the floors.

Neighbors complained of the people who lived there. Fernando Garcia, a resident on Burlington St. said, “Too much prostitution, a bunch of drug dealers. They steal from everybody in the neighborhood and then go hide inside that old place. Bunch of crackheads, just naked taking showers right in front. My grandkids don’t need to see that.”

Two reports were found while researching for this. One incident was the theft of a battery from a city-owned vehicle that was parked outside of the plant. The other incident involved a woman who was in the process taking down her groceries when a man came up from behind her a held a gun to her head. He took her purse and car keys and drove away in her 1979 Pontiac Catalina.

In 1996, Opa-Locka commissioners looked into reopening the water plant to provide much needed financial relief to the city’s residents. The plan never happened as the cost to renovate the plant was much more than expected.

On April 2, 2007, firefighters responded to fire after flames were seen shooting out of the building. One person was found inside and was treated for smoke inhalation. The fire was thought to have been set by a squatter and was another reason residents wanted the complex gone.

Finally, on January 14, 2010, demolition on the plant began to make room for a new facility that would pump fresh water to the city.