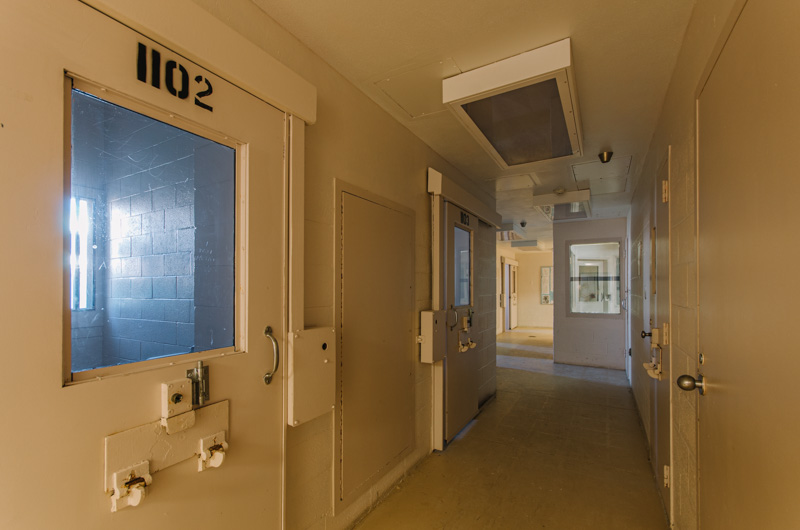 One of the more notorious inmates housed here was Aileen Carol Wournos, also known as the “The Florida Highway Killer”, was a serial killer who murdered seven men in Florida in 1989 and 1990 by shooting them at point-blank range while working as a prostitute. She was sentenced to death for six of the murders and was executed by lethal injection on October 9, 2002. The 2003 movie “Monster” chronicles her life’s story from childhood to her first murder conviction.

Wournos was born on February 29, 1956 in Rochester, Michigan, to 14-year-old Diane Wournos and 16-year-old Leo Dale Pittman. Aileen Wournos’ older brother Keith was born a year prior. Wournos never met her father who was a diagnosed schizophrenic and incarcerated at the time of her birth for sex crimes against children, hanging himself in prison in 1969. At four years old, Wournos’ mother abandoned her and her brother, leaving them with her maternal grandparents. According to Wournos, she was sexually assaulted and beaten on the regular by her grandfather. By age 11, she was engaging in sexual activities with boys at her school in exchange for drugs, food, or cigarettes. She also engaged in sexual activities with her brother. At age 14, she became pregnant after being raped by one of the grandfather’s friends. She gave birth to a boy and the child was given up for adoption. Shortly after, Wournos dropped out of school and subsequently was kicked out of her grandparents’ house where she supported herself as a prostitute living in the woods by her old home.

In 1976, Wournos hitchhiked her way to Florida where she gained a long rap sheet involving armed robbery, forging checks, car theft, assault, resisting arrest, and obstruction of justice. On June 2, 1986, Volusia County deputy sheriffs held Wournos for questioning after being accused of holding a man she was servicing at gunpoint and demanding $200. Between November 1989 and November 1990, Aileen Wournos murdered seven men in what she claimed was self-defense after the men attempted to rape her while she was servicing them. Police found one of the victims’ belongings at a pawn shop and retrieved fingerprints from them matching fingerprints found on the victim’s car. As Wournos had a long criminal record in Florida, her fingerprints were on file. She was arrested on January 9, 1991, at the Last Resort, a biker bar in Volusia County. She was found guilty for six of the murders and sentenced to death where she was incarcerated at the Broward Correctional Institution, then transferred to the Florida State Prison for execution.

Another noteworthy inmate was Judias “Judy” Buenoano, also known as the “Black Widow”, who was convicted for the murders of her husband and paralyzed son, as well as the attempted murder of her fiance. In 1962, she married James Goodyear, an Air Force sergeant, and the two lived in Orlando along with her son, Michael, who James adopted. In 1971, after serving a tour of duty in Vietnam, James returned home and quickly fell ill. He died on September 16, 1971, due to what was initially thought to have been natural causes. Judy collected money from his life insurance policies and collected additional insurance money after her house caught fire.

The following year, she began dating Bobby Joe Morris and moved in with him in 1977. Just a few months after she moved in, Morris fell severely ill and died in January 1978. Judy was able to collect money from a life insurance policy she had taken out on him. Later that year, she legally changed her name to Buenoano, meaning “good year” in Spanish.

Judy’s son, Michael, joined the U.S. Army in 1979 and was stationed in Fort Benning, Georgia. On his way to Georgia, he stopped at his mother’s house in Florida. After arriving at Fort Benning, Michael began showing symptoms of poisoning and doctors found high levels of arsenic in his blood. Within a few weeks, Michael’s muscles in his arms and legs became atrophied to the point that he required metal braces to walk or move his arms. He was discharged from the army and returned to his mother’s house. On May 13, 1980, Judy took Michael out in a canoe; the canoe overturned and Michael, weighed down by his arm and leg braces, drowned. Judy collected $20,000 from Michael’s military life insurance policy.

Following her son’s death, she began dating John Gentry and soon engaged. In December 1982, Gentry fell severely ill and was hospitalized, but recovered and returned home. In 1983, Gentry’s car exploded while on his way to a liquor store. While recovering from his injuries, police began looking into Judy’s background and found several discrepancies. A further investigation revealed that in November 1982, Judy was telling her friends that Gentry was suffering from a terminal illness and an analysis of “vitamin” pills” she had been giving him came back as containing arsenic and formaldehyde. The bodies of James Goodyear, Bobby Joe Morris, and her son, Michael, were exhumed and autopsies concluded they had all died of arsenic poisoning. She was convicted for the murders of all three as well as multiple counts of grand theft for insurance fraud, and multiple counts of arson, also for insurance fraud. She was suspected of a 1974 murder in Alabama and the death of her boyfriend, Gerald Dossett, in 1980, but by the time these suspicions were brought up, she was already incarcerated at the Broward Correctional Institution awaiting execution. At the time of her execution on March 30, 1998, she became the first woman executed in Florida since 1848.

After the facility’s closure in 2012, the property was put up for sale and the land is meant for industrial use, which means it could be used by a developer for anything from another prison to a junkyard to manufacturing plants. Because of the close proximity to Pembroke Pines and houses there, the city of Pembroke Pines bought the property so they would have better control of what would be replacing the old prison. In the end, the facility was demolished and replaced with a new facility for the maintenance and repairs of Broward County’s fleet of vehicles.