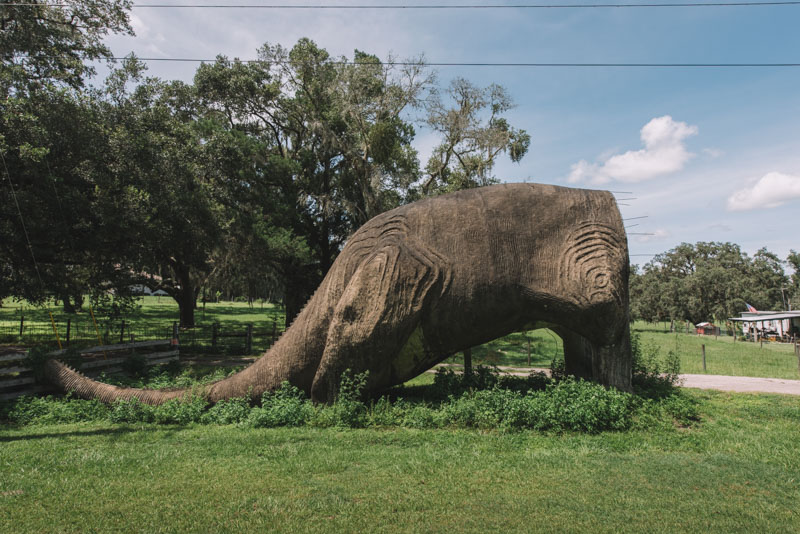 Located in Brooksville, the unfinished sculpture of a brontosaurus was the work of August Herwede who lived in the house on the property behind the dinosaur. August was born September 21, 1886, and was a painter and interior decorator. After his wife’s death in 1964, he began constructing concrete animals surrounding his house. Within two years, August had built over 30 animals including an elephant, wooly mammoth, a pair of lions, and various dinosaurs. Having been asked by his daughter-in-law as to why he didn’t start building the sculptures sooner, August is quoted in The St. Petersburg Times, saying “I wanted to build an elephant but Mama wouldn’t let me”.

August Herwede took inspiration from the 1964 World’s Fair held in New York which featured a dinosaur exhibit called “Dinoland”. Sponsored by Sinclair Oil, Dinoland featured 9 full sized dinosaurs including the company’s trademark brontosaurus. That same year, Sinclair Oil also built a service station located on US 19 in Spring Hill in the shape of a brontosaurus.

Unfortunately, August’s brontosaurus would never be completed. While working high up on scaffolding on the back of his creation, he fell and broke both his legs, passing away a few months later at the age of 80 in 1967 unable to finish his brontosaurus. After his death, his menagerie was sold piece by piece until all that remained was the unfinished brontosaurus which remains there to this day.