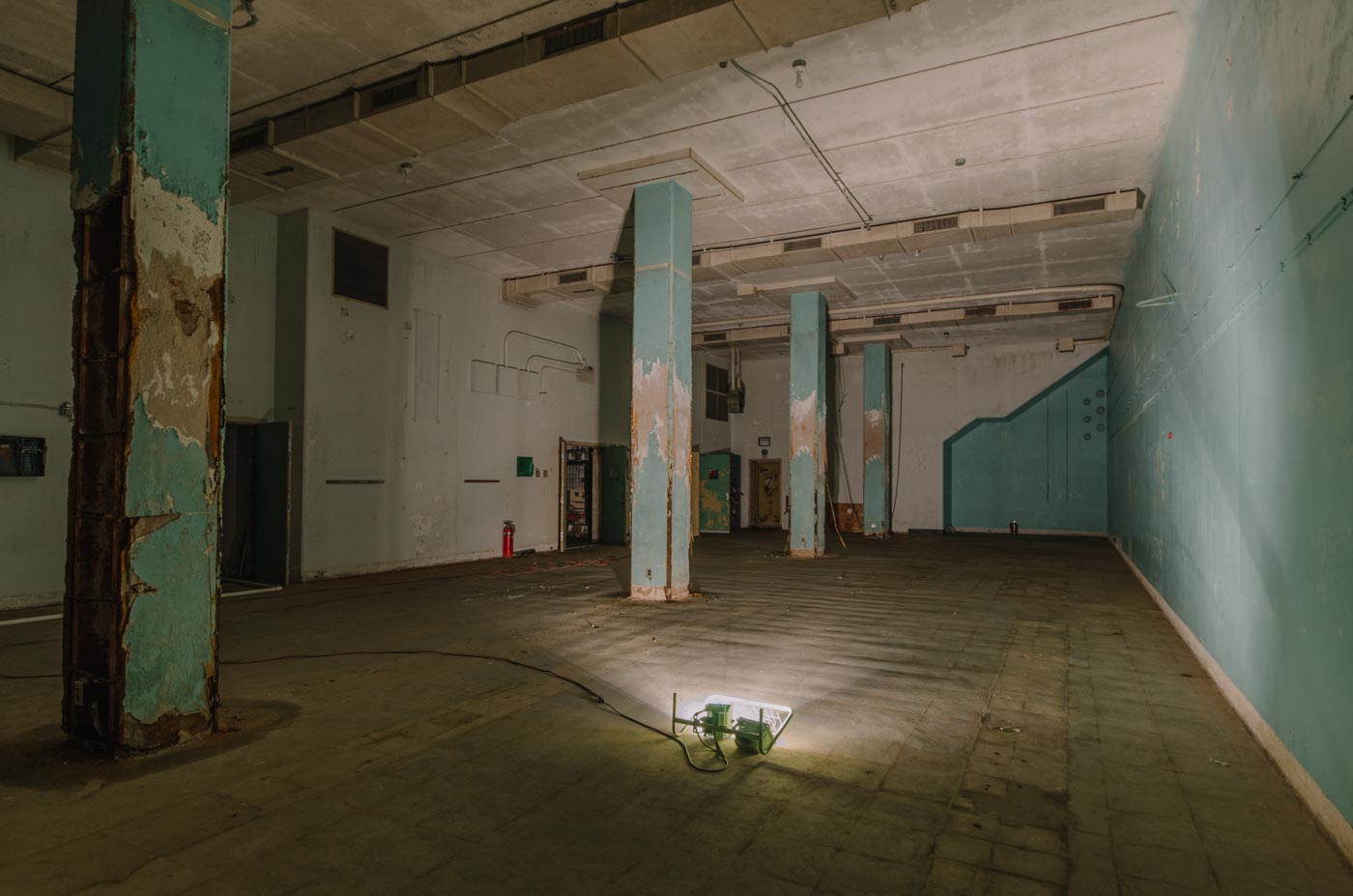 Constructed in 1967, the 7,700 square-foot bomb shelter was built by AT&T to be used in the event of a nuclear disaster to house five people for up to 30 days to keep the lines of communication open. The shelter was designed by Alfred Easton Poor, an American architect who was involved in the construction of many buildings and projects in New York City as well as multiple works in Washington, D.C. for the United States Government. Over his long career, Poor’s projects include both public and private sector works. Along with fellow New York architect Robert P. Rogers, Poor won the open international design competition for the Wright Brothers National Memorial in 1928. For the US Government, he worked on a project that restored and extended the East Front of the US Capitol Building in the early 1960s and was also a leading architect in designing the US Library of Congress’ James Madison Memorial Building, the third-largest public building in Washington.

Poor was especially active in the New York City area. His projects include the Jacob K. Javits Federal Building, the Queens County Courthouse and prison in Kew Gardens, the Home Insurance Company Building, and the 40-acre Red Hook housing projects. Poor was chosen by Walter Annenberg to design the Annenberg School for Communication at the University of Pennsylvania. According to his obituary in the New York Times, he also “designed dozens of branch offices in Manhattan and abroad for the Chemical, National City and Marine Midland banks” and “designed a number of Long Island country homes.”

Unlike a fallout shelter that protects from radioactive debris, the main purpose of this shelter was to protect from shock waves and overpressure, though it could protect from fallout for a short period of time as well. The front retaining wall is 3 feet thick, the roof slab is between 24-31 inches thick, and the concrete floors are 26 inches thick. Industrial springs were installed throughout the structure to further help against the blast shock waves.

Upon entering through the front main blast door, visitors would sign in at the registration desk before having to go through a decontamination shower. To their left was equipment storage where the more cumbersome excess equipment was stored such as radios and cleaning supplies. After exiting decontamination, they entered the main room with its 17-foot high ceiling, where they would spend their time eating, sleeping, etc. Adjacent to the main room was H20 Treatment, where water was stored and treated to be used for showering or even drinking. A stairway led to another storage area where even more equipment was kept as well as the pantry, which was stocked with canned foods such as sugars, milk solids, and flour. Just beyond the storage room was where the switching equipment was kept; where the chosen five individuals would work keeping the lines of communications open. The shelter was also rigged with 200-kilowatt generators, massive air-intake tunnels, and a custom ventilation system complete with radiation filters to be used in the face of a nuclear disaster.

Feeling that it was about to lose the suit, AT&T proposed an alternative — the breakup of the biggest corporation in American history. It proposed that it retain control of Western Electric, Yellow Pages, the Bell trademark, Bell Labs, and AT&T Long Distance. It also proposed that it be freed from a 1956 anti-trust consent decree that barred it from participating in the general sale of computers. In return, it proposed to give up ownership of the local operating companies. This last, it argued, would achieve the Government’s goal of creating competition in supplying telephone equipment and supplies to the operative companies. The settlement was finalized on January 8, 1982, with some changes ordered by the decree court: the regional holding companies got the Bell trademark, Yellow Pages, and about half of Bell Labs.

Effective January 1, 1984, the Bell System’s many member companies were variously merged into seven independent “Regional Holding Companies”, also known as Regional Bell Operating Companies, or “Baby Bells”. This divestiture reduced the book value of AT&T by approximately 70%. AT&T would continue to be a provider of long-distance service, while the now independent Regional Bell Operating Companies would provide local service, and would no longer be directly supplied with equipment from AT&T subsidiary Western Electric.

Around this time, the bomb shelter was abandoned and subsequently vandalized, having its generators and any valuable metals and wiring throughout the structure removed. In 2005, it was sold to a group of South Florida investors who put it up for sale in 2013, advertising it as being the “ultimate man cave” at the cost of $499,000. The shelter was bought in 2014 by Data Shelter which announced that it would be renovated into a “fully redundant, fault-tolerant, hardened data center” with construction being completed in the spring of 2018. Unfortunately, that was the last update on the project as the shelter has remained vacant.