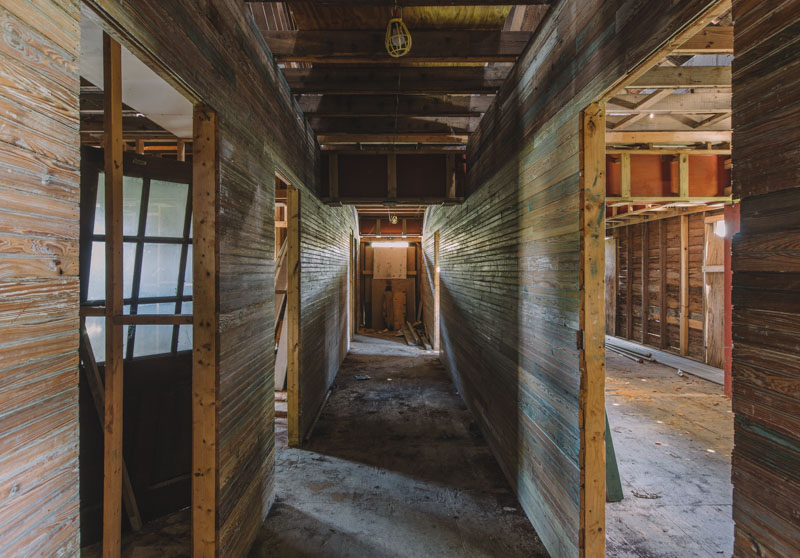 Standing at the corner SW 157 Ave and SW 232nd Street for over a hundred years, the wood-framed structure known as Anderson’s Corner was built William “Popp” Anderson in the early 1900s. The years between 1910 and 1920 saw Dade County’s population quadrupled in size. The landscape was quickly evolving from deserted wetland swamps to rows of fields as rudimentary roads and auspicious homesteaders found their way south. Draining the lowlands provided ample opportunities for agricultural endeavors and it was not long before extensive development was underway.

Because transportation between disparate settlements throughout the county was difficult, general stores provided a level of convenience to residents in outlying areas, including many farmers. Anderson’s Corner is the last of these pioneer-era commercial properties still standing in Miami-Dade county.

William “Popp” Anderson came from Indiana in the early days of the twentieth century to join his friend and hunting companion Charles Grossman, the first settler in the area. Silver Palm was known for its extensive pinelands and plentiful game. Anderson was one member of William J. Krome’s Cape Sable Expedition in 1902-1903, which was formed to survey a route for Henry Flagler’s Florida East Coast Railway to Flamingo, now in Everglades National Park. Thereafter he established a homestead just east of his friend and just south of the Perrine land grant.

For some time, Anderson operated a commissary car for the Drake Lumber Company, providing staples and necessities for workers in remote lumber camps. In 1911, he purchased a five-acre parcel of land from Lilburn R. Nixon who was also part of Krome’s Cape Sable Expedition. Using lumber from the Drake Lumber Company, he constructed the Wm. Anderson General Merchandise Store which sold a myriad of items to residents and businesses. With living quarters on the second floor, Anderson’s Corner was strategically located across from the Silver Palm School at the intersection of two well-built roads. They sold a large selection of items to the nearby residents and businesses, though the only other options to purchase items was the town of Cutler Bay, some 15 miles away.

In 1912, William Anderson married Atka Vandora Newlan, who had three children from her previous marriage. William and Atka would have six more children together. In 1916, he donated 10 acres of land to the Dade County School Board for the construction of a new consolidated school. That same year, the Redland Farm Life School opened and was at the time the second largest rural consolidated school in the country.

The general store was in operation until the mid-1930s. In the following years, the building used in various ways such as a rooming house for migrant workers. After William Anderson’s death in 1961, Anderon’s Corner was sold to James Cothran and his wife to be converted into an apartment complex. The couple leased the grocery store and gas station next door while renting out two apartments in the old house for $15 per week. It was condemned in 1975, although a reprieve was granted for rehabilitation.

Listed on the National Register of Historic Places in 1977, the site became a Miami-Dade historic site in October 1981, the first building to be officially designated as a county historic site. Around the same time, a group of investors purchased the building and was restored, opening as an eatery in 1985 operated by Thomas Henry. By 1986 however, the property was foreclosed upon by the bank. In 1988, it was leased out to restaranteur Dick Hissing and reopened as the Inn at Anderson’s Corner. Tropical fruit farmer, Joan Green and chef Mario Martinez bought Anderson’s Corner and opened it in December 1991 which was highly praised among the farming community in the area.

Sadly, the building was heavily damaged in 1992 when Hurricane Andrew made landfall in Homestead as a Category-5 hurricane, leaving long-lasting damaging effects throughout South Florida. Though there have been renovation efforts over the years, none have been successful and it remains vacant to this day. In 2019, Anderson’s Corner was listed on the Dade Heritage Trust’s Most Endangered Sites in Miami-Dade list, along with other notable buildings such as the Deauville Hotel and Lincoln Memorial Cemetery. You can read about Anderson’s Corner and many other abandoned places in my book, Lost Miami: Stories and Secrets Behind Magic City Ruins.