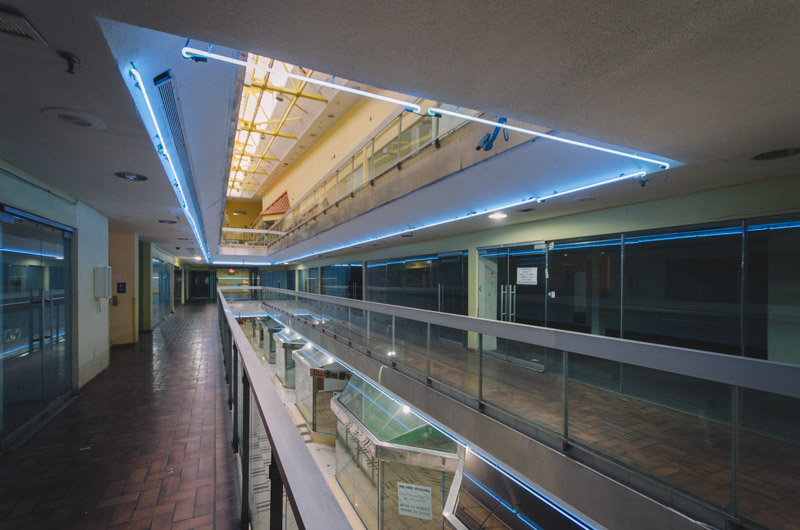 Located between such historic structures such as the Shoreland Arcade and the Alfred I. Dupont Building, one wouldn’t think that a dilapidated shopping mall was historic as well. Many may not know it, but 777 International Mall was first built between 1946 and 1947 as the Miami Theatre for the Wolfson-Meyer Theater Company movie theater chain.

The Wolfson-Meyer Theater Company, or Wometco as it would later be known as, was founded in 1925 by brothers-in-law Sidney Meyer and Mitchell Wolfson, the same Wolfson family that founded the Wolfsonian Museum and the Florida Moving Image Archives. Construction began on a state of the art theater in downtown Miami known as the Capitol Theatre featuring an early form of air conditioning consisting of huge fans that sent out “currents of refreshing air” that had been forced through a spray of ice-cold water. Although make-shift, this system was able to keep the building’s interior at a consistent 70 degrees.

Wometco went on to build many other theaters in South Florida including the Lincoln Theatre in South Beach and the Cameo Theatre in Miami Beach which would later become a major venue for punk and hardcore acts with notable shows including The Ramones, Dead Kennedys, Black Flag, Circle Jerks, Bad Brains, and D.O.A., among others. Wometco would go on to build the company into a business conglomerate, founding Miami’s first television station in 1949, WTVJ, and operating it out of the Capitol Theatre which had been converted for television. Wometco would go on to own six television stations, a cable television company, a soft drink bottling franchise, and tourist attractions including the Miami Seaquarium.

The company’s downfall would come in 1983 when its co-founder, Mitchell Wolfson, died in 1983. Wolfson left no succession plans in his will, Wometco would quickly be bought out in 1984 by investment firm Kohlberg Kravis Roberts in a deal worth $1 billion, the largest corporate buyout ever to that date. The company’s assets were slowly sold off throughout the 1980s and 90s, and today only owns a franchise of Baskin-Robbins/Dunkin’ Donuts stores in Miami, the Caribbean, and Puerto Rico.

The Miami Theatre was one theatre out of many as part of the Wometco movie theater chain, opening on April 18, 1947, with Dick Haymes in “Carnival in Costa Rica”. Designed by architect S. Charles Lee, one of the most prolific and distinguished motion picture theater designers on the West Coast. The three-story building featured one screen and an auditorium that seated approximately 1,850 patrons. The Miami Theatre included Huyler’s Restaurant, a candy shop and diner chain based out of New York which three floors of the theater plus the air-conditioned basement that was used as the kitchen. The theater’s interior decoration was designed as if patrons were in an aquarium with painted murals, wavy walls decorated in shell and sea-life motif reliefs, and elongated cascading ceilings.

The theater operated until 1978 when Wometco closed the Miami Theatre and sold it to architect Oscar Sklar and his associates, who had the building gutted and reconstructed into a shopping mall in the early-1980s. While Sklar appreciated the theater’s interior design, the building was in a prime location with a high volume of tourism, domestic and international trade, and commercialism. The property was later sold to Marlon Avneri for $3 million in 1998. In 2011, Avneri came across some vintage photographs of the Miami Theatre in its prime and wanted to restore the building’s facade back to its original grandeur. After contacting Sklar and with the city’s approval, the building facade was mostly restored and is now reminiscent of the former Miami Theatre.

In 2014, billionaire developer Moisha Mana purchased the property for $14.5 million. It was one of many purchased by Mana throughout the years as he had become the biggest property owner in both downtown and Wynwood Miami. By 2019, according to The Real Deal, he had “amassed nearly $375 million worth of properties downtown totaling over 1.3 million square feet of buildings on about half a million square feet of land.”

In 2017, he renamed the 777 International Mall to Mana Contemporary Miami, 777 Mall, and allowed artists and art organizations to rent out space in the dilapidated structure. According to the Miami New Times, the building served as the organization’s base in Miami and was modeled after Mana Contemporary’s headquarters in New Jersey and its Chicago campus, including exhibition spaces, artist studios, and a broad clientele of local creatives. In three years, 777 Mall “became an integral part of Miami’s underground culture, supporting an underserved section of the arts community”.

Then in March 2020, the pandemic struck, forcing it to shut down to comply with county regulations. While tenants didn’t have to pay rent, it was a huge blow to the community as everything was put into storage while tenants hoped for its eventual reopening. Many tenants claim they had no communication with Mana since March until they received an eviction notice stating that 777 Mall would “permanently close effective January 8, 2021. You will need to have moved out of your studio before this date.” The reason for its closure was due to the number of major repairs needed to be able to reopen safely was cost-prohibitive. The building’s future remains uncertain.